A military convoy belonging to Iraq’s Popular Mobilization Units (PMU), also known as Hashd al-Sha’abi, has reportedly come under attack by US airstrikes near the Iraq-Syria border.

Sabereen News, a Telegram news channel associated with the PMU, said the attack took place late on Tuesday and targeted three vehicles carrying infrared monitoring equipment in the town of al-Bukamal in the eastern province of Dayr al-Zawr.

The news channel said the convoy was struck by four missiles fired from US F-15 fighter jets, and that the attack left no casualties.

The vehicles were carrying infrared monitoring equipment, which is used by the PMU and other counter-terrorism forces to prevent infiltration by members of the Takfiri Daesh terrorist group.

Media reports indicate that the attack was carried out by the United States, but the US military denied any involvement, with Army Colonel Wayne Morotto saying in a tweet that the US “did not conduct air strikes in al-Bukamal, Sept. 14, 2021.”

Back in June, the Pentagon conducted airstrikes against three targets belonging to Iraqi resistance groups along Iraq and Syria’s common border in the same area.

Pentagon Press Secretary John Kirby said the attacks took place in two locations in Syria and another in Iraq near the border, adding that the “precision airstrikes” hit “facilities” belonging to the groups of “Kata’ib Hezbollah and Kata’ib Sayyid al-Shuhada.”

Iraqi and Syria experts consider the attacks to be an attempt by the US to entrench and prolong its military presence in the countries by targeting the groups that fight directly against Daesh, Washington’s apparent excuse for the military interference.

The US’s presence in both the countries is illegal.

In the case of Iraq, the country’s parliament passed a law early last year, mandating cancellation of Baghdad’s permit for the US-led forces’ presence.

The law secured the approval of the legislative body’s overwhelming majority, which came in response to an earlier US drone attack that had martyred senior Iranian and Iraqi anti-terror commanders, Lieutenant General Qassem Soleimani and Abu Mahdi al-Muhandis.

Iraq’s resistance outfits have vowed not to lay down their arms until the US winds down its illegal presence and meddling in Iraq.

Izadi families pay smugglers to save girls from ISIL 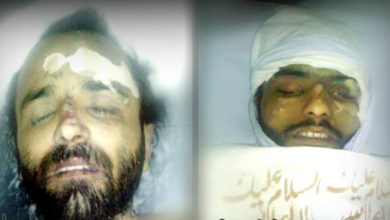