The Iraqi Al-Hashd al-Shabi or the PMU began an operation this morning to clear the border areas with Syria of ISIL terrorists.

The operation command of Al-Hashd Al-Shabi in Al-Anbar province in western Iraq announced this morning (Friday) the beginning of the operation to clear the border areas with Syria of ISIL terrorists. The operation is code-named “Thar Al-Ebtal”.

According to the Al-Sumaria News website, four al-Hashd al-Shabi brigades, along with local forces, began their operation in the early hours of the morning from the Al-Waleed crossing in the Al-Qaim area. Areas where the ISIL terrorists are operating and areas used by terrorists as their hideouts are going to be cleared.

Al-Hashd al-Shabi has also said in a statement that the operation was launched following an increase in the movements of ISIL terrorists in the region and in order to avenge the blood of the martyrs of the Al-Hashd Al-Shabi border guards who were recently martyred by ISIL.

Moreover, on Tuesday, Naser al-Ghannam, commander of operations in Iraq’s Anbar province, announced that the army had taken full control of the Anbar desert, adding that the terrorist operations in the province have reduced. 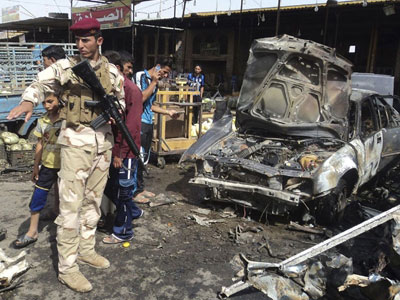