The chairman of the Iraqi Popular Mobilization Units Falih al-Fayyadh has underlined the need to implement the parliamentary resolution requesting the government to end the presence of foreign forces in the country and reiterating that all American troops must leave Iraq.

“Iraqis have proved that their country will not be submissive to anyone. We want relations with everyone, but ties must be anchored in dignity, respect for sovereignty and mutual interests,” Falih al-Fayyadh said on Sunday at a ceremony in the western Iraqi province of Anbar, marking the first martyrdom anniversary of top Iranian commander Lieutenant General Qassem Soleimani and his Iraqi trenchmate Abu Mahdi al-Muhandis in a US terrorist drone strike.

General Soleimani, the commander of the Quds Force of Iran’s Islamic Revolution Guards Corps (IRGC), and Muhandis, the deputy head of the Popular Mobilization Units (PMU), were assassinated along with their companions in the strike authorized by US President Donald Trump near Baghdad International Airport on January 3, 2020.

Both commanders were admired by Muslim nations for eliminating the US-sponsored Daesh Takfiri terrorist group in the region, particularly in Iraq and Syria.

The US assassination drew a wave of condemnation from officials and movements throughout the world, and triggered huge public protests across the region.

Iraqi lawmakers approved a bill two days after the attack, demanding the withdrawal of all foreign military forces led by the United States from the country.

Early on January 8 last year, the IRGC targeted the US-run Ain al-Assad air base in Iraq’s Anbar to retaliate the assassination of General Soleimani.

According to the US Defense Department, more than 100 American forces suffered “traumatic brain injuries” during the counterstrike on the base. The IRGC, however, says Washington uses the term to mask the number of the Americans who perished during the retaliation.

Iran has described the missile attack on Ain al-Assad air base as a “first slap.”

Elsewhere in his remarks on Sunday, Fayyadh recounted the invasion of Anbar province by al-Qaeda and Daesh, and warned against the hateful ideology of the terrorists and their sponsors, which pivots on incitement of sectarian strife and division of Iraq.

“Islam is the religion of love, friendship, brotherhood and equality; but they (the terrorists) wanted to provoke an ethnic conflict and partition Iraq through their distorted beliefs,” he said.

Fayyadh also denounced the January 13 decision by the US Treasury Department’s Office of Foreign Assets Control to blacklist and impose sanctions against the deputy PMU chairman, Abdulaziz al-Mohammadawi, known as Abu Fadak.

He said Washington is in no position to decide for Iraqi commanders, stressing that the commanders are judged by the Iraqi nation as well as their capabilities in battle grounds.

The US Treasury Department said in a statement on January 8 it had blacklisted 64-year-old Fayyadh, accusing him of being responsible for a crackdown by security forces on anti-government demonstrations that gripped the Iraqi capital, Baghdad, and later swept through several other cities in late 2019.

The demonstrations erupted as a result of public anger at corruption, mass unemployment and failing public services. Reports say some 550 people were killed and 30,000 injured. The protests caused then Prime Minister Adel Abdul Mahdi’s resignation. 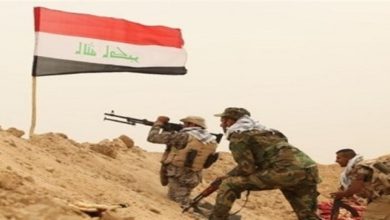 Over 30 ISIL Terrorists Killed in Iraqi Airstrikes in West