The spokesman for the Al-Nujaba Movement, Nasr Al-Shammari, declared the US embassy in Baghdad a military base and not a diplomatic mission, stressing, “This barracks cannot be considered a diplomatic embassy.”

The spokesman for Al-Nujaba pointed out that no one is permitted to legalize the presence of the occupying forces, declaring his regret over the fact that Iraq has remained under occupation until now, and considered that the greatest embarrassment for any true Iraqi that his country is occupied until the year 2020.

“The US forces did not come with a decision from Iraq, and everyone who says that is an outright lie,” Al-Shammari said. “The main reason for the problems of Iraq is the presence of the occupying US forces,” adding that the foreign military forces will be forced out soon”.

“There is no such thing as fears of the US at the Islamic Resistance,” said the deputy secretary general of Al-Nujaba. “Our confidence in God and our conviction will not be undermined by America or America’s small agent’s in the region”.

Iraqi forces drive terrorists out of villages near Mosul 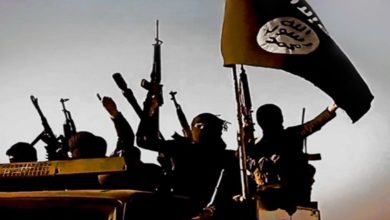