The US terrorist forces have conducted military tests at the American airbase of Ain al-Assad in Anbar province in western Iraq, according to reports.

The Lebanese al-Mayadeen television channel reported on Monday that the suspicious movements by the US Central Command (USCENTCOM) in western Iraq’s Anbar province have recently increased as the US terrorists have installed and tested a drone equipped with counter rocket, artillery, and mortar (C-RAM) systems in Ain al-Assad airbase.

The US-led coalition has also announced that the American troops have launched a military drill with M777 howitzer artillery cannon in the airbase.

Moreover, Washington has recently announced plans to move its embassy in Baghdad to Ain al-Assad, Iraq’s largest airbase. The US claims that by doing so, the embassy will protect itself from possible attacks by resistance groups.

Many Iraqi experts and officials have reacted to the decision, saying the US embassy should be located in Baghdad and that moving it to a place other than the capital is against protocols and diplomatic practice.

This is while the US has recently installed the Patriot missile system at Ain Al-Assad base, without obtaining official approval from the Iraqi government.

Contrary to Washington’s claims, observers say that by installing the system, the United States intends to support the Zionist regime and cover Saudi Arabia’s common borders with Iraq and ensure its security.

Despite the US actions, eight groups affiliated to Iraq’s resistance group, al-Hashd al-Shabi, have stressed that these terrorists must leave Iraq as soon as possible. 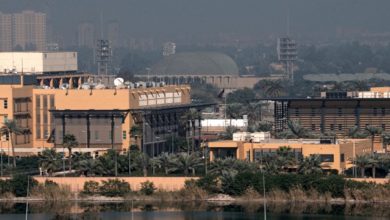 Two Missiles Strike Near US Embassy in Baghdad – Reports