A senior Iraqi lawmaker says the United States has tightened security around its embassy in the capital Baghdad, emphasizing that any attack against the positions of the Popular Mobilization Units (PMU), better known by the Arabic name Hashd al-Sha’abi, as well as affiliated field commanders will not go unanswered.

“Security in and around the American embassy in the Iraqi capital has been fortified, because these forces (US troops) have a plan to carry out strikes against the PMU, resistance factions and their leaders. They want to keep their soldiers away from any reaction that their actions might trigger off,” Karim Alawi, a member of the Iraqi parliament’s security and defense committee, told the London-based and Arabic-language al-Araby al-Jadeed newspaper on Saturday.

He noted, “This is why US soldiers have been moved from some sites in Iraq to major military bases, where the forces can be protected. They fear their presence in small bases would expose them to rocket fire from Hashd al-Sha’abi groups. As a result, they have gathered their forces in major bases, so that they are protected.”

“Americans are well aware of the fact that any attack against resistance fighters or Hashd al-Sha’abi will not go unanswered, therefore, they want to protect their forces against any potential missile attack by resistance factions,” Alawi said.

The Iraqi legislator highlighted that “there is no withdrawal of US forces from Iraq, and what happened is simply redeployment of the troops in main bases like Ain al-Assad and Harir,” which lie in Iraq’s western province of Anbar and the semi-autonomous Kurdistan region respectively.

The New York Times reported on Friday that the Pentagon had last week ordered a secret directive, which called on US military commanders to prepare a campaign against Kata’ib Hezbollah, which is part of Hashd al-Sha’abi.

But the United States’ top commander in Iraq has warned that such a campaign could be bloody and counterproductive.

Lieutenant General Robert P. White wrote in a blunt memo that a new military campaign would also require that thousands more American troops be sent to Iraq and divert resources from the so-called fight against the Daesh Takfiri terrorist group.

Iraqi lawmakers unanimously approved a bill on January 5, demanding the withdrawal of all foreign military forces led by the United States from the country following the assassination of Lieutenant General Qassem Soleimani, the commander of the Quds Force of the Islamic Revolution Guards Corps, along with Abu Mahdi al-Muhandis, the deputy head of Hashd al-Sha’abi, and their companions in a US airstrike authorized by President Donald Trump near Baghdad International Airport two days earlier.

Later on January 9, Adel Abdul-Mahdi, the former Iraqi prime minister, called on the United States to dispatch a delegation to Baghdad tasked with formulating a mechanism for the move.

According to a statement released by his office at the time, Abdul-Mahdi “requested that delegates be sent to Iraq to set the mechanisms to implement the parliament’s decision for the secure withdrawal of (foreign) forces from Iraq” in a phone call with US Secretary of State Mike Pompeo.

The 78-year-old politician said Iraq rejects any violation of its sovereignty, particularly the US military’s violation of Iraqi airspace in the assassination airstrike. 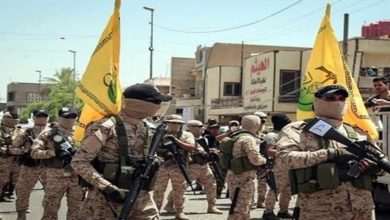