Iraq’s prime minister has made it clear that American forces redeploying from neighboring Syria into the Arab country don’t have permission to stay.

Adil Abdul-Mahdi said after a meeting with visiting US Defense Secretary Mark Esper on Wednesday that the American forces were not allowed to remain in Iraq and his government was taking “all international legal measures” to address the issue.

“We have (already) issued an official statement saying that, and we are taking all international legal measures. We ask the international community and the United Nations to perform their roles in this matter,” he said.

He asserted that any foreign troop presence on Iraqi soil must be authorized by the government first and should end upon Baghdad’s request.

Esper arrived in Baghdad on an unannounced visit that would revolve around the arrival of the US forces.

In a major U-turn in the US military policy, the White House announced on October 6 that the US would be withdrawing its forces from northeastern Syria, clearing the path for an expected Turkish incursion into the region.

Three days later, Turkey launched the offensive with the aim of purging the northern Syrian regions near its border of US-backed Kurdish militants, whom it views as terrorists linked to local autonomy-seeking militants of the Kurdistan Workers’ Party (PKK).

The Iraqi military said Tuesday that American forces crossing into Iraq could only be there in transit.

Esper said Saturday that the nearly 1,000 American troops pulling out of northeastern Syria following a military invasion of the area by Turkey would move to western Iraq.

The US troops crossed into Iraq through the Sahela border crossing in the northern province of Dohuk, according to local news reports on Monday.

Footage was released of US armored vehicles carrying troops into Iraq, with Iraqi Kurdish sources confirming that American troops had crossed into the semi-autonomous Kurdistan Region.

Shammari echoed the prime minister’s remarks, pointing to government concerns that the US troops might stay in Iraq. 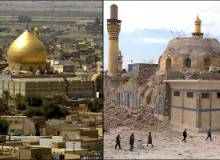