Iraqi Prime Minister Adel Abdul-Mahdi has held Israel responsible for a string of attacks on the positions of the pro-government Popular Mobilization Units (PMU) better known by the Arabic name Hashd al-Sha’abi, following investigations into recent assaults on the voluntary forces.

“Investigations into the targeting of some Popular Mobilization Forces positions indicate that Israel carried it out,” Abdul-Mahdi said in an interview with the Doha-based Arabic-language al-Jazeera television news network on Monday.

Earlier this month, the air defenses of Hashd al-Sha’abi, thwarted an airstrike by an “unidentified” drone on a main military base in Iraq’s north-central province of Salahuddin.

The Salahuddin Operations Command Center of the volunteer forces announced in a statement on September 11 that missile defense systems fired shots at the aircraft as it was flying over the headquarters of the 35th Brigade of the fighters.

The statement said the shots forced the aircraft to leave the area to an unknown location.

Back on September 5, the second-in-command of the Popular Mobilization Unitsm Jamal Jafaar Mohammed Al Ebrahim, better known by the nom de guerre Abu Mahdi al-Mohandes, issued an administrative order, declaring the formation of the forces’ Air Force Directorate, and appointing Salah Mahdi Hantous as its chief.

A week earlier, Ahmad al-Assadi, spokesman of the Fatah Alliance, a parliamentary bloc representing the PMU, told journalists that the Baghdad government was preparing a complaint to the United Nations against Israel over attacks on the positions of Hashd al-Sha’abi.

“Some of the government investigations have reached a conclusion that the perpetrator behind some of the attacks is absolutely, certainly Israel,” he said, declining to provide details on the evidence.

“The government is preparing sufficient evidence and documents to complain to the [UN] Security Council. It won’t submit a complaint against an unknown entity,” Assadi said.

Iraq’s military said on August 26 that it had launched an investigation into a purported Israeli strike that killed two Hashd al-Sha’abi fighters near the town of al-Qa’im close to the country’s western border with Syria.

Sayf al-Badr, the spokesman for the Iraqi Health Ministry, said in a statement that at least one person was killed and 29 others were wounded in a powerful explosion that rocked a military base in southern Baghdad on August 12.

An ammunition warehouse reportedly exploded inside a federal police military base, named Falcon, in Owerij area near the southern district of Doura.

Al-Ahad television network reported on July 19 that a drone had dropped explosives onto a base belonging to the Popular Mobilization Units near the town of Amerli in the early hours of the day, killing at least one PMU fighter and injuring four others.

Additionally, the Iraqi al-Etejah television network reported that an American B350 reconnaissance plane had flown over the area a few days earlier.

The Israeli regime has also a record of attacking the forces fighting Daesh terrorists in Syria.

In June 2018, Hashd al-Sha’abi fighters came under attack in Syria’s border town of al-Hari, in the eastern province of Dayr al-Zawr, as they were chasing Daesh terrorists out of the area.

Both the Syrian government and Hashd al-Sha’abi declared back then that the attack near the Iraqi-Syrian border had been deliberate and could only have been carried out by either Israel or the United States.

More than 80 people, 7 Iranians among them, killed in Iraq’s twin attacks 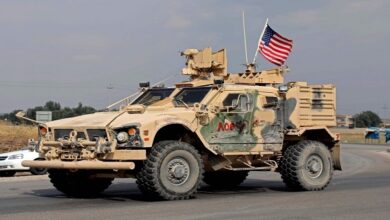 US military convoy arrives in Syria from Iraq