Ayatollah Khamenei the Supreme Leader of the Islamic Revolution attended a graduation ceremony at Imam Khomeini Naval Academy in Noshahr. Speaking during theceremony, His Eminence referred to the recent American-made film which insults the Holy Prophet of Islam (s.w.a.) and stressed: “We do not insist on proving that certain people or government officials were involved in this crime, but the behavior and methods of the leaders of the arrogant powers, American politicians and certain European countries have caused peoples of the world to point the finger of blame at them. They should prove that they were not an accomplice in this great crime and they cannot do so by simply denying their involvement. They should prove their innocence with actions. They should prevent such transgressions.”
The Supreme Leader of the Islamic Revolution said that the enemies of Islam are frustrated in the face of the Iranian nation and the wave of Islamic Awakening, further adding: “The great wave of Islamic Awakening is what causes them to do such idiotic things.”
His Eminence said that the protests against the anti-Islam film are a lesson that will go down in history and added: “They reason that because of their respect for freedom of expression, they cannot prevent people from committing such great sins. Who would believe this in the world? In the countries where there are specific red lines that help maintain the principles of their arrogant power, in the countries where they seriously enforce these red lines and use force to stop people from violating them, who would believe that in those countries, government officials feel obligated to respect freedom of expression when it comes to insulting what is held sacred in Islam?”
The Supreme Leader of the Islamic Revolution referred to anti-Islamic motives of the arrogant powers and added: “It is because of these motives that the arrogant powers have not prevented people from insulting what is held sacred in Islam and they will not do so in the future either.”
Ayatollah Khamenei reiterated: “Today in many western countries, nobody dares question the Holocaust whose nature is questionable. According to the reports I have received, in America if people decide to write something against homosexuality on the basis of psychological and sociological principles, they will be prevented from publishing their work. How is it that these people feel obligated to respect freedom of expression?”
The Supreme Leader of the Islamic Revolution said that the Americans support dictators and added: “Nobody would believe that the American regime is a supporter of democracy, a regime that supported a person like Hosni Mubarak for thirty years and a person like Mohammad Reza Pahlavi for thirty five years in spite of all those crimes he committed in Iran.”
Ayatollah Khamenei said that the popular protests in front of American embassies in different countries are a sign that peoples of the world deeply hate the policies of the arrogant powers and the Zionists. He reiterated: “Governments do not protest because of certain considerations, but peoples cannot tolerate this any longer. Whenever they find an opportunity like this, they protest against centers affiliated with America, against America’s social and political centers in different countries. They hate America.”
At the end of his statements, the Supreme Leader of the Islamic Revolution stressed: “The confrontation between Islam and the arrogant powers of our time will undoubtedly end with a victory for Islam.” 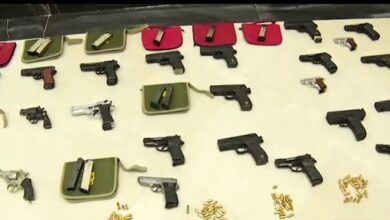