Speaking at a gathering of leaders of the Iranian Revolutionary Guards Corps in Tabriz on Saturday, Ayatollah Mohiyeddin Haeri-Shirazi, a teacher in the Islamic Seminary of Qom, stated that the separation of Islam from the Quran and Ahlul-Bayt led to the creation of the Daesh Takfiri terrorist group and added, “This separation has led to extremist and Takfiri groups becoming more powerful throughout the world.”

The Iranian cleric said that if Daesh promotes the Quran but their incorrect understanding of the Quran, it is due to their abandonment of the commentators of the Quran – the Ahlul-Bayt and stated, “Today, Daesh and Takfiris are a product of the cunning and deception of the enemies of Islam in order to attack the Islamic world, especially Iran.”

Ayatollah Haeri-Shirazi and the United States and the imperialist powers of the world are deceptive and cunning and have undermined that the security of the countries of the region, “But they must know that those who stood in war, God has promised them victory and with this illusion, they think they have conquered Iran.”

His Eminence said called the actions of Daesh, extremist and Takfiri groups as a stigma on the term “jihad” and stated, “The terrorism and inhumane acts which have led to the deaths of innocent and defenseless people in the culture of Takfiri and Zionist groups, like Daesh, is considered as jihad according to their interpretation. Meanwhile, no action which is more disgraceful that this exists.”

Ayatollah Haeri-Shirazi stated that with their brutal actions, Daesh quickly weakened the attraction of the people of European countries and other countries toward Islam and added, “The actions of these extremist groups have inflicted a blow on the image of Islam and led to a bad impression of the religion in the world.”

He noted that in opposition to the evil and humiliating actions by members of Daesh, the jihad of members of Hezbollah and the defenders of the holy shrines has led to the honour and glory of Islam.

“Today, the security and sovereignty of Iran is due to the assistance of those who were martyred in the defence of the holy shrines, who have left their countries to help to the oppressed people of the region and are busy in jihad on the path of God to protect the security of their country,” Ayatollah Haeri-Shirazi said. 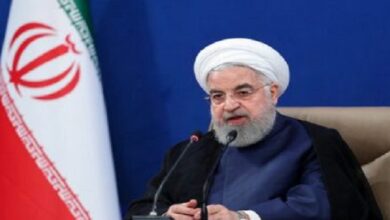 US, Zionist regime main objective is to mount pressure on Iran: Rouhani