World Shia Leader met this meeting with the families of the martyrs and veterans of Qom province.

Speaking during the meeting, His Eminence said that believing in self-sacrifice and entering into a covenant with God is the secret behind the power of the Iranian nation.

AytullahÂ Khamenei reiterated: “This great nation will stand firmly against the greed of the arrogant powers by relying on these factors which are a source of grandeur.”

AytullahÂ Khamenei said that the issue of martyrdom is very deep-rooted and added that believing in martyrdom and the greatness of the Â martyrs is a sign of the spiritual depth of a nation’s identity.

His Eminence said that faith, courage and religious passions of the people and the patience of the families of martyrs have resolved the issue of martyrdom for the Iranian nation. He further added: “We should think about the important issue of how the Iranian nation has become so influential in global matters and become so powerful, dear, and attractive in the eyes of other nations without enjoying complicated military equipment and extensive propaganda tools.”

AytullahÂ Khamenei said that the broad and enthusiastic welcome extended to President Ahmadinejad in Lebanon is an issue that is worthy of investigation and analysis.

He added: “These realities are indicative of the attraction and greatness of the Iranian nation in the eyes of other nations.”

AytullahÂ Khamenei further referred to the reasons behind the greatness and power of the Iranian nation.

AytullahÂ Khamenei described the importance of martyrdom and said: “When a nation and its youth believe in self-sacrifice and martyrdom on the path of God, they will benefit from the power, grandeur and greatness which have been promised by God. It is due to this reason that the Iranian nation is stronger and greater than other nations.”

AytullahÂ Khamenei referred to the unique influence of the martyrs on the greatness of the Iranian nation and said that martyrs and veterans are the standard-bearers of the justice front. “With their practical example, they have taught the Iranian nation to believe in martyrdom and entering covenants with God,” he noted.

AytullahÂ Khamenei said that the patient fathers, bereaved mothers, understanding children and honorable wives of the martyrs are another factor behind the greatness of the Iranian nation. “They felt proud in the face of the seemingly bitter event of losing their dear ones. They proved that they believe in entering covenants with God and follow the path of Zaynab bint Ali, just as their honorable martyrs did.”

AytullahÂ Khamenei said that the resistance mounted by the Iranian nation and the honorable families of martyrs against the threats of the global domineering powers is rooted in their feeling of power and national self-confidence.

He further reiterated: “The Iranian nation will not give up its ideals in the face of the cries of the bullying powers.”

AytullahÂ Khamenei touched on the necessity of strengthening and deepening faith in God in the hearts of the people and the officials, further reiterating: “We should appreciate such faith which is a source of power and rely on it in order to make scientific, technological, political, social and economic achievements.”

Grand Ayatollah touched on the numerous plots and measures of the enemies and their followers inside the country which were aimed at weakening the faith and religious beliefs of the people after the demise of Imam Khomeini (r.a.) and added: “Those who are opposed to the Iranian nation did not achieve anything but failure from those plans and this will be the case in the future as well.”

AytullahÂ Khamenei referred to the youth of the country as pure-hearted and said that they are ready to make sacrifices, just as the youth who were present during the early stages of the Revolution did. 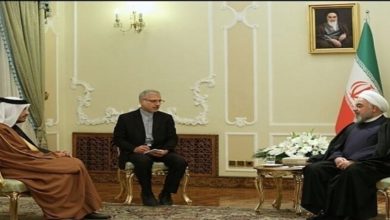 US will pay heavy price for assassinating General Soleimani: Rouhani

Any revison to Lausanne understanding will lead to failure, Zarif says

European intelligence: The probable kidnapping of Iranian officials in Mina stampede by Mossad