Tehran’s interim Friday Prayers Leader Ayatollah Ahmad Jannati has said that the Iranian nation, through its vigilance, has stood against the hostile conspiracies of the US.

Tehran interim Friday Prayer leader named sanctions as one of the US crimes against Iran and noted that the Americans do not let go of this topic and stir problems for the Iranian nation and are intent on somehow forcing the Iranian nation into submission. But, they are totally unaware of the nation they are dealing with.

Ayatollah Jannati further referred to betrayal of the rights of Iranian nation by the US, while noting that they are a number of irrefutable and documented evidences proving this fact.

In further remarks, Ayatollah Jannati referred to Saturday, August 14, which marks the anniversary of victory of Lebanon’s resistance, and added that the faithful Hezbollah combatants managed to resist for 33 days against the Zionist regime forces and finally the Zionist regime faced a humiliating defeat and retreated.

Tehran interim Friday Prayer leader emphasized that this victory dealt a heavy blow to US and the Zionist regime. 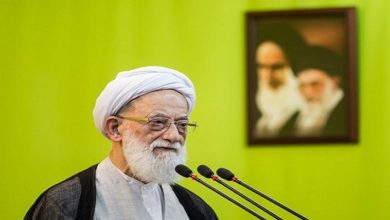 Ayatollah Emami Kashani Blames US for Tragic Situation in Yemen