Ayatollah Seyed Ahmad Khatami, throughout Tehran’s this week Friday Prayer sermons termed the epic registered through the presence of tens of millions of people throughout the rallies staged to mark the 31st anniversary of victory of the Islamic Revolution as the main victory of all. According to Shiite News Correspondent,Tehran’s interim Friday Prayers Leader, Ayatollah Khatami thanked the glorious and eye-catching presence of the grand nation of Iran during these

Â rallies, noting that people’s presence in rallies, marking the anniversary of victory of Islamic Revolution conveyed important messages. He noted that people through their glorious presence in these rallies showed they continuously support the sacred Islamic system, and will not separate from the Islamic establishment in the face of any ploy and deceit. He underscored that Western states and their allies should know our people’s viewpoint toward the Islamic system is not political and is religious in nature. Ayatollah Khatami added: “The Iranian nation considers the Islamic system as the platform of the sacred religion of Islam and supports the Islamic establishment till its last breath and last drop of blood.” Ayatollah Khatami went on to say that the view of people toward the Leader is not solely political, while adding that another message conveyed by people’s glorious participation in February 11 rallies was renewal of their allegiance with the Founder of Islamic Republic of Iran late Imam Khomeini (May his soul rest in peace) and the ideals of martyrs. Ayatollah Khatami further pointed out that although a few are intent on claiming that in Islamic Iran there is no late Imam’s path, people believe the path of late Imam Khomeini (May his soul rest in peace) is perfectly transparent and is being led by the Supreme Leader of Islamic Revolution Ayatollah Seyed Ali Khamenei. 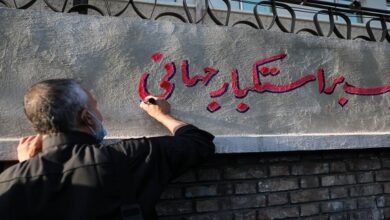 Iranians protest in front of France’s embassy in Tehran