Tehran has rejected a United Nations human rights resolution against Iran as a “politically motivated” instance of hypocrisy and “abuse” of UN mechanisms by Western governments targeting independent states.

Of a total number of 182 countries participating in the vote, 84 voted in favor of the resolution while 30 voted against it. Another 66 states abstained.

During the voting session, representatives from countries including Pakistan, Syria, Venezuela and Belarus expressed opposition to the motion.

China and Russia also rejected the resolution as “politicization” of human rights issues while North Korea and Cuba described the vote as an excuse for destabilizing and pressuring other governments.

Speaking on Thursday, Mousavi said that among the states backing the resolution were “governments with a long record in the systematic violation of human rights.”

The spokesman added that countries whose interventions in foreign countries and “their allies’ dictatorships and occupation” have left “bitter memories for people across the world” are “in no position to make human rights recommendations for Iran.”

“One of the main backers of this resolution, the United States, is violating the most basic rights of more than 83 million Iranian citizens by engaging in economic terrorism, specifically targeting women, children, seniors and medical patients,” he said.

Mousavi highlighted that certain backers of the resolution, such as Israel and other “backward regimes” in the region, are guilty of killing the people of Palestine, Yemen and oppressing domestic dissidents.
The spokesman added that the Universal Periodic Review, a periodic review of the rights situation held on a rotational basis for all UN member states every three years, presented a suitable opportunity to evaluate the conduct of states far from any sort of discrimination.

“Iran, as a religious democracy, seeks to take steps in the betterment of human and citizen rights on a domestic, regional and international level within the framework of its constitutional and civil commitments and international undertakings,” he said.

Canada, under the heavy influence of Zionist interest groups, is known to regularly draft an anti-Iran resolution every year.

Tehran has in response highlighted that Ottawa itself has long been involved in a broad range of human rights abuses at home and elsewhere.
Canada has proceeded with its plans to supply Saudi Arabia with weapons in the past year despite human rights concerns regarding their use in the ongoing war on Yemen.

This frame grab from a video released by the Houthi Ansarallah movement shows two reportedly Canadian-made light armored vehicles (LAVs) belonging to Saudi Arabia destroyed by Yemeni forces in an August 2019 offensive in the Kitaf district in northern Yemen. (Via RCI)

Canada has also been accused of a wide range of abuses targeting its aboriginal population. 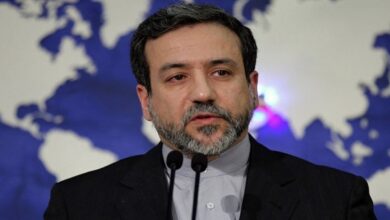