Arresting women in Bahrain is deemed a very sensitive issue in a conservative society, where its traditions and customs are not reflected in the practices of the Bahraini authorities. The arrest, torture and sexual abuse of women behind bars show one of the Bahraini regime’s hideous faces.

Activists and tweeters launched a campaign on social media demanding the authorities to release female prisoners, who were arrested over politically-motivated cases and sentenced to various prison terms in unfair trials.

Bahraini activist Khalil Al-Madhoun, residing in Beirut, wrote: “Shame on a regime that claims to be an Arab and Muslim regime, while it contradicts Arab traditions and Islamic principles. Women in Bahrain are arrested and defamed. Their photos are published in governmental newspapers and aired on official state television. Meanwhile, the international community is not only sitting back and watching, but is also supporting and joining the regime in its brutality and crimes.”

As for Mohammad Al-Maliki, he tweeted: “Bahraini women are subjected to the most heinous forms of torture and humiliation and are sentenced in sham courts to lengthy prison terms.”

For his part, President of the Bahrain Forum for Human Rights (BFHR), Baqer Darwish, reminded of the articles concluded by the Bahrain Independent Commission of Inquiry (BICI) appointed by King Hamad bin Isa that disclosed women were harassed by government forces.

Article 1126 of BICI report stated that “Women at their homes were asked to stand in their sleeping garments and were not permitted to cover their bodies. These women were humiliated and degraded, particularly in light of their religious beliefs.”

Vice website reported last week that activist Najah Ahmad told her supporters in a phone call from prison that they sexually harassed her and tried to tear her clothes off, adding that they touched her genitals and threatened to rape her.

Najah will be prosecuted after the F1 ends in Bahrain. She may face a prison term that reaches up to 15 years over comments she made on social media outlets criticizing the race tournament last year.

Victim of torture and sexual harassment activist Ebtisam Al-Sayegh said “the fact that there are 10 females behind bars deprived of their children over charges related to freedom of expression is the ugly truth that the media makeup tools can’t fix.”

Australia-based activist Hassan Al-Sitri considered that the arrests of women is a shame to the Al Khalifa ruling family that has arrested 355 women since the eruption of the February 2011 protests.

SALAM for Democracy and Human Rights expressed, in a statement, its deep concern over the increasing assaults against women in Bahrain, who are being subjected to arbitrary arrests, detention, torture, physical and psychological abuse and denial of basic rights in prison.

SALAM called for the release of “all the women who were arrested on politically motivated charges” and dropping “all charges brought against them,” investigating allegations of torture and abuse against women, ending “the use of checkpoints as a tool for sexual harassment and intimidation of women” and adhering “to international law to eliminate all forms of violence against women.” 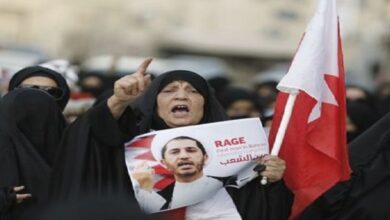 Badge of honor for Iraqi PMU chief to be put on US sanctions list: Bahraini opposition