The regime forces in Bahrain conducted a wide arrest campaign on Sunday night and Monday morning in which 15 houses were raided.

The number of arrests over the past two days summed up to 21, including a pregnant woman and a child.

In five cases, the forces assaulted citizens during arrest. In one case, the arrested was a pregnant woman in her eighth month accompanied by her husband. They were both badly assaulted after they were prevented from leaving an area under security clampdown. The couple was stopped at a security checkpoint where one security personnel spat in the womanâ€™s face and then they were both led to a police station where they were severely beaten. This caused the pregnant woman hemorrhage, why she was then taken to hospital.

More than 29 pro-democracy protests took to streets in different areas across Bahrain, some of which were attacked by regime forces with fire arms (birdshot) and toxic teargas leaving at least 7 wounded. Protests were followed by the regimeâ€™s collective punishment in 8 residential areas.

In a recent incident, and precisely on 31st May 2013, regime forces were witnessed raining the village of Maâ€™ameer with tens of random shots of toxic teargas grenades in just two minutes.

In Shakhoura village, 4 cases of vandalism of private property, including doors and windows, were documented during home raids. 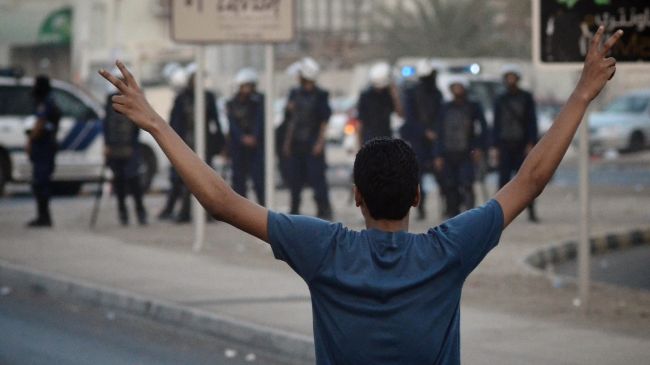