Hundreds of Bahrainis took to the streets in different areas across Bahrain, demanding that the authorities lift the house arrest imposed on spiritual leader of the Shiite majority, Ayatollah Sheikh Isa Qassim, also put an end to the discrimination and persecution practiced against Shiites.

Activists published pictures of demonstrations that were held on Friday (August 25, 2017) in Buri, Bilad Al-Qadeem, Musalla, Abu Sibah, Shakhoura, Southern Sahla, Karana and a number of other areas, during which protesters chanted anti-regime slogans and called for ending the ruling Al Khalifa family’s monopoly over power.

Demonstrators also called for the release of political prisoners, particularly [opposition] leaders, expressing their condemnation of the policy of impunity and demanding that those involved in human rights violations be held accountable.
Activists documented the authorities’ use of teargas and shotgun pellets in their crackdown on a number of peaceful marches. 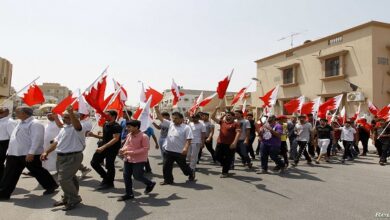