A Bahraini rights group has expressed deep concern over the health condition of the country’s prominent human rights activist Nabeel Rajab, calling on the ruling Al Khalifah dynasty to grant him access to his family and lawyers.

The Bahrain Center for Human Rights (BCHR) said its 52-year-old chairman has been unable to communicate with family members since last week, noting that the activist is currently being held in a military hospital after authorities failed to provide him with proper medical care following a long delayed surgery in April.

The BCHR highlighted that Rajab is unfit to be discharged from hospital, and his health condition will further deteriorate if he is sent back to prison.

On December 22, 2016, Bahraini authorities accused the pro-democracy campaigner of making comments that “harm the interests” of the Manama regime and other Persian Gulf kingdoms through an article attributed to him and published by French daily Le Monde.

The article slammed the Daesh Takfiri terrorist group for their crimes against humanity and Persian Gulf Arab countries for their failure to stop the spread of the violent Wahhabi ideology.

Wahhabism, the radical ideology dominating Saudi Arabia and freely preached by its clerics, fuels the ideological engine of such terror organizations as Daesh and Fateh al-Sham, al-Qaeda’s Syrian branch formerly known as al-Nusra Front. Takfiri terrorists use the ideology to declare people of other faiths “infidels,” justifying the killing of their victims.

Rajab, who was detained on June 13 last year for tweets that criticized Manama’s role in the deadly Saudi-led military campaign against Yemen, could face up to 15 years in jail. Liz Throssell, the spokeswoman for the UN High Commissioner for Human Rights, said in a statement that Rajab was arrested for “exercising his right to freedom of expression.”

The United Nations Committee against Torture called on the Bahraini regime on May 12 to release Rajab and open an investigation into widespread reports of ill-treatment and torture of detainees.

They are demanding that the Al Khalifah dynasty relinquish power and allow a just system representing all Bahrainis to be established.

Manama has gone to great lengths to clamp down on any sign of dissent. On March 14, 2011, troops from Saudi Arabia and the United Arab Emirates were deployed to assist Bahrain in its crackdown.

Scores of people have lost their lives and hundreds of others sustained injuries or got arrested as a result of the Al Khalifah regime’s crackdown.

On March 5, Bahrain’s parliament approved the trial of civilians at military tribunals in a measure blasted by human rights campaigners as being tantamount to imposition of an undeclared martial law countrywide. 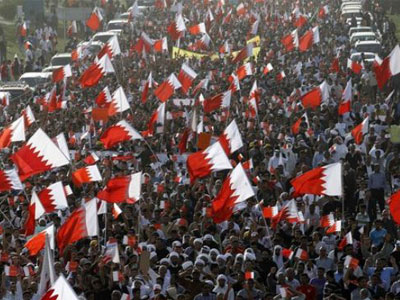