Two Bahraini dissidents have taken a legal action in the United Kingdom against the Al Khalifah regime, accusing the Persian Gulf kingdom’s authorities of using FinFisher, also known as FinSpy, surveillance software to target their personal computers in the aftermath of the 2011 popular uprising.

They maintain that their computers were infected with FinSpy in September 2011, seven months after anti-regime protests started in Bahrain.

Shehabi and Mohammed say they used the computers to get photos and videos documenting attacks on Bahraini citizens out of the island nation.

They also used them to communicate with other activists, journalists, political prisoners, torture victims and their families and lawyers.

But they only realized they had been spied on three years later, after Wikileaks released a target list in relation to the Al Khalifah regime’s use of FinSpy.

The spyware, developed by Anglo-German technology company Gamma Group, reportedly can carry out live surveillance through a computer’s camera and microphone and access documents, emails and messages.

Shehabi said the lawsuit, scheduled to be heard by the court on Tuesday and Wednesday, is an important one.

“We want to show that harassing people in this way is happening by states … It is intrusive and should not be allowed,” he said.

“Who knows if we will win but it is important to show everyone that it is happening and we can do something about it,” Shehabi noted.

Shehabi and Mohammed argue that the harassment and personal injury were “caused by acts or omissions” in the United Kingdom, but the Manama regime has claimed it has state immunity.

“Foreign governments should not be able to hide behind state immunity when they are accused of causing serious harm to those living in the UK,” Ida Aduwa, a solicitor at Leigh Day, involved in the case, said.

“We hope the court will dismiss the Kingdom of Bahrain’s arguments so we can proceed to a trial on the issues of the case,” she added.

Bahrain’s most prominent cleric Ayatollah Sheikh Isa Qassim has said that drawing up a new constitution is the only way out of the political crisis in the protest-hit tiny Persian Gulf country, urging the regime in Manama to pursue an agreement with the Bahraini opposition instead of increasingly suppressing dissent.

Over Last Week, 40 Protests and 26 Arrested in Bahrain 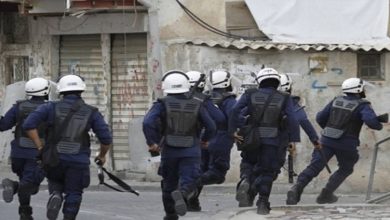