Clashes have broken out between police in Bahrain and anti-regime demonstrators protesting against the prolonged detention of the country’s main opposition leader, Sheikh Ali Salman.

Riot police used tear gas to disperse the demonstrators gathered outside the cleric’s house in Bilad al-Qadeem village on the outskirts of the capital, Manama, on Tuesday.

According to reports, five people were injured during the clashes, and similar clashes have also erupted in other villages in the country.

The al-Wefaq National Islamic Society’s leader, who was arrested on Sunday, was remanded in custody on Tuesday for a week pending further questioning.

The opposition movement has condemned Sheikh Salman’s detention, saying the regime’s actions entrench their tyrannical rule and close all options for a political resolution.

Sheikh Salman is charged with “promoting regime change by force, threats, and illegal means and of insulting the Interior Ministry publicly,” the Bahraini prosecutor, Nayef Mahmud, said in a statement on Monday.

Bahrain has been witnessing almost daily protests against the Al Khalifa dynasty since early 2011, when an uprising began in the kingdom. Since then, thousands of protesters have held numerous rallies in the streets of Bahrain, calling on the Al Khalifa royal family to relinquish power.

Shia Scholars in Bahrain Call for Support for Ayatollah Qassem 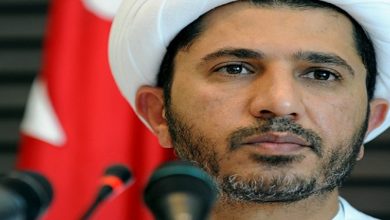