The Al Khalifa regime in Bahrain is planning measures to hinder mourning rituals that the country’s Shia majority organize during the month of Muharram.

Shia Muslims around the world mourn the martyrdom of Imam Hussein (AS), the Sayyid-ul-Shuhada (master of martyrs), in Muharram, the first month in the lunar Hijri calendar.

The third Shia Imam (AS) and a small group of his followers and family members were martyred by the tyrant of his time – Yazid Bin Moaweya, in the battle of Karbala on the tenth day of Muharram (known as Ashura) in the year 680 AD.

The ruling regime in Bahrain has in recent years tried to prevent the country’s Shias from holding the mourning rituals.

Restrictive measures and rights abuses have increased in Bahrain in the run-up to Muharram, Bahrain Mirror reported.

The measures include summoning those organizing mourning rituals to threaten them.

Some religious centers have been warned that in case of hosting Muharram rituals, they will be fined and shut down for three years.

The security apparatus has also had some local media to publish article against organizing mourning ceremonies.

Bahrain has seen anti-regime protests over the past nine years. The major demand has been the ouster of the Al Khalifa regime and the establishment of a just and conclusive system representing all Bahraini nationals.

The Manama regime, in return, has ignored the calls and is pressing ahead with its heavy-handed crackdown and persecution of human rights campaigners and political dissidents. 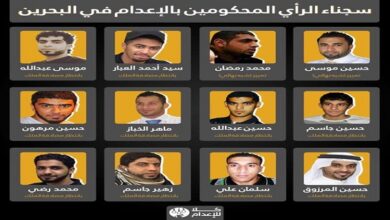 “No for execution” campaign in solidarity with Shia prisoners in Bahrain