2019 raid campaigns resulted in the arrest of at least 500 Bahrainis, the Bahrain Forum for Human Rights (BFHR) noted, stressing that most of the raids were carried out at night and unlawfully.

BFHR stressed that the arrests were always accompanied by the intimidation of residents, in addition to damaging the contents of the houses or stealing some personal belongings by members of the security forces.

Similar to what they do every year ahead of the February 14 anniversary, the security authorities arrested dozens of citizens in widespread house raid campaigns launched in more than 10 villages.

Civilian-clad forces randomly stormed the houses of citizens in Diraz, Karzakan, A’ali, Buri, Abu Saiba, Al-Ekr, Al-Qidam, Nuwaidrat, Sitra and Karana. Residents said that the forces searched their houses and destroyed some of their belongings.

In March 2019, the Bahrain Center for Human Rights (BCHR) expressed its deep concern over the continued targeting of athletes by Bahraini authorities, and the ill-treatment they are subjected to.

BCHR said that security services had recently arrested Mohammed Khalil, a player in the Bahrain Bowling Team, and Al-Ma’ameer Volleyball Club player Ali Marhoun and three of his brothers, including the sports photographer Hassan Marhoun.

The Center considered the arrests to be part of a government campaign targeting athletes.

The government also launched a random campaign of house raids and arrested a number of citizens. The campaign was carried out on March 29, 2019; i.e. two days before the Formula One race.

This came at a time when international organizations strongly criticized F1 organizers and the International Automobile Federation for agreeing to hold the tournament in Bahrain again despite its poor human rights record.

Another raid on Monday, August 19, 2019, resulted in the arrest of a number of children from Jidhafs. Activist Ibtisam Al-Saegh confirmed the news of children being taken into custody in the campaign carried out at dawn.

Al-Saegh noted that the raids “caused a state of terror among the families, who were subjected to terrifying raids that led to the arrests of their children.”

In conjunction with protests held in Kuwait, Bahrain apprehended dozens in a security campaign that included several areas across the country.

The interior ministry, claimed, as usual, that those arrested have links with foreign persons and that they intended to carry out acts that would harm internal security and threaten civil peace.

Al-Wefaq National Islamic Society said it is likely that the Bahraini regime arrested dozens of citizens over fear of people taking to the streets.

The Society stressed that the Bahraini regime is practicing the maximum level of repression to prevent any voice, stance or word from being expressed regarding the authoritarian and tyrannical reality taking over the country. It added that the reasons behind the arrests are unclear, and are believed to have been carried out with the aim of intimidating Bahrainis and preventing them from taking to the streets, especially since there is a regional atmosphere headed in this direction.

Al-Wefaq blamed international bodies for the deterioration of the humanitarian situation and the high level of repression and tyranny in Bahrain, and pointed out that international and particularly US support, through stances and reports, encourages the regime to oppress, continue to tyrannize, spread the culture of hatred and violate the freedoms of peaceful citizens.

President of dissolved Islamic Council speaks from Geneva: We will communicate our case to UN officials 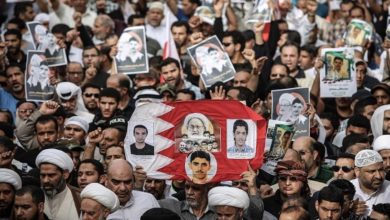