In a post on his Twitter account on Wednesday, Taliban spokesman Zabihullah Mujahid said the country “condemns the attack on a place of worship and clerics in Iran. It has nothing to do with Afghans and Afghanistan.”

An assailant killed an Iranian cleric with a knife and injured two others in an attack at the courtyard of the Imam Reza holy shrine on Tuesday, the third day of the fasting month of Ramadan.

An official investigation is still underway into the case.

He was, however, identified in media reports as Abdollatif Moradi, a 21-year-old Uzbek who illegally entered Iran through Pakistan last year and resided in Mashhad. He was arrested at the scene of the attack.

Videos circulated in the media show that he was influenced by Takfiri and Wahhabi ideology.

“Such tragic events, which are rooted in the deviant ideas of Takfiri currents, oblige us more than ever to take the danger of militant extremism seriously,” he added.

“Afghanistan, which has always been a good example of religious tolerance, has unfortunately been the main victim of extremist-deviant groups for almost two and a half decades.”

Rabbani also offered condolences to the family of the martyred cleric as well as the Iranian government and people, wishing a speedy recovery of the wounded. 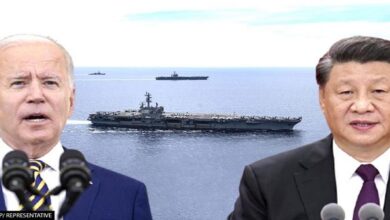 China warns away US warship in South China Sea