In was RamaÄan, 19th 40 A.H. at dawn when Imam was preparing to head for Siffin to battle once again with Mu’awiya but he was wounded by the most black-hearted man in the world named ‘Abd al-Rahman Ibn Muljam Muradi and martyred three days later on RamaÄan 21st.
As reported by Ibn Sa’d, three Kharijites called ‘Abd al-Rahman Ibn Muljam, Burak Ibn ‘Abd Allah Tamimi and ‘Amr Ibn Bukayr Tamimi allied in Mecca to kill Imam ‘Ali (a), Mu’awiya and ‘Amr Ibn ‘As.
To visit his Kharijites’ friends, ‘Abd al-Rahman went to Kufa. Once he went to meet a group from the tribe of â€œTaym al-Rabbabâ€, he saw a girl called Qutam Bnt Shajanna Ibn ‘Adi whose father and brothers had been killed in Nahrawan. When Ibn Muljam proposed to her, she declared that her marriage portion should be 3000 (Dinar

in addition to Imam ‘Ali’s murder. He told that by accident with this very aim he had traveled to Kufa. [1480]He smeared his sword with poison and attacked Imam on the head. The deepness of the wound as well as the poison of the sword martyred Imam. Reportedly, Ibn Muljam had been in Ash’ath Ibn Qays’s house that night. [1481]Various narrations indicate that Imam was attacked by Ibn Muljam inside the mosque. [1482] In accordance to other ones, he attacked Imam while he was waking people up for prayer. [1483] Many historical sources have referred to the former although many reports recorded say Imam was attacked while doing prayer.
Maytham Tammar had reported that Imam had started his Dawn Prayer and no sooner had he recited eleven verses of the Sura of â€œthe Prophetsâ€ than Ibn Muljam wounded Imam on the head. [1484] As narrated by one of Ju’da Ibn Hubayra’s descendants, Imam was wounded while doing his prayer. [1485]The man above-mentioned, Ju’da, had been Umm Hani’s son who every so often had led the prayers as a substitute leader and narratedly he had been the one who completed the prayer when Imam was attacked. Shiykh Tusi has also confirmed the aforesaid narration. [1486] Yet, Muttaqi Hindi’s report had been that Ibn Muljam had hit Imam when Imam was prostrating back. [1487]Ibn Hanbal [1488] together with Ibn ‘Asakir [1489] has confirmed the report. Ibn ‘Abd al-Barr stated that there had been no consensus on whether Imam was attacked while doing the prayer or before it and whether any one substituted him or he himself led the prayer to the end. Many are of the opinion that Imam had Ju’da Ibn Hubayra lead the incomplete prayer. [1490]A great number of hadiths have been narrated by the Holy Prophet’s Household and the Sunnis concerning how Imam felt during the night before being wounded. Ibn Abi l-Dunya quoted Imam al-Baqir (a) as saying that Imam had been fully aware of his martyrdom. [1491] As soon as being injured, Imam shouted out, ÙØ²Øª ÙˆØ±Ø¨ Ø§Ù„ÙƒØ¹Ø¨Ø© â€œBy Allah of Ka’ba, to salvation I reached.â€ [1492]Ibn Abi l-Dunya has narrated Imam’s will in different ways which included both financial and religious issues. The salient issues recommended by Imam were as follows: Observation of kinship, heed to the orphans and the neighbors, following the guidelines of the Holy Qurâ€™an, performing prayers as the pillar of the religion, Hajj, fasting, Jihad, Zakat (tax alms) following the Holy Prophetâ€™s infallible Household, serving Allahâ€™s servants, enjoining to good and forbidding from evil.
Reportedly, on RamaÄan 21st, while Imam was whispering, Ù„Ø§Ø§Ù„Ù‡ Ø§Ù„Ø§ Ø§Ù„Ù„Ù‡ â€œThere is no God but Allahâ€ and the verse of, ÙÙ…Ù† ÙŠØ¹Ù…Ù„ Ù…Ø«Ù‚Ø§Ù„ Ø°Ø±Ø© Ø®ÙŠØ±Ø§Ù‹ ÙŠØ±Ù‡ ÙˆÙ…Ù† ÙŠØ¹Ù…Ù„ Ù…Ø«Ù‚Ø§Ù„ Ø°Ø±Ø© Ø´Ø±Ø§Ù‹ ÙŠØ±Ù‡ â€œSo he who has done an atomâ€™s weight of good shall see it. And he who had done an atomâ€™s weight of evil shall see itâ€ Breathed his last. [1493]According to another narration, after Imam’s martyrdom, Imam Hasan (a) and Imam Husayn (a), Muhammad Ibn Hanafiyya, ‘Abd Allah Ibn Jaâ€™far as well as few numbers from the household took Imam (a) out of Kufa nightly and hiddenly from sight buried him. It was because the Kharijites and the Umayyads might exhume Imam. [1494]Upon hearing the news of Imam ‘Ali’s martyrdom, a group of the Exaggerators in Ctesiphon did never believe their ears. This group is the initiator of the exaggerating thoughts among the Shi’ite Muslims whom we will address later. Ibn Abi l-Dunya’s report in this respect referred to a person named Ibn as-Sawda’ from the tribe of Hamdan know as ‘Abd Allah Ibn Saba’.
Elsewhere, the name of ‘Abd Allah Ibn Wahb as-Saba’i, was mentioned and that such a claim had been made in Ctesiphon. [1495] Both narrations reveal that the person had even been anonymous. See also ‘Uthman’s Opponents.
Imam â€˜Aliâ€™s Life
The analysis of Imam’s lifestyle as a paragon seems beyond the possibility here; yet, we refer to some aspects for luck in brief.
Imam’s political and social life is so exemplary that it can be deemed utopian. At times, so uniquely firm was he regarding divine decrees that not a single one could ever emulate him as he himself had pointed to it in a letter. [1496]For those yearning to be faithful to it, his lifestyle is a perfect pattern. Every time we can learn from it but the way is still too long to go. In other wards, Imam’s lifestyle has been the best during man’s life. It belongs to a perfect man who can indeed be called human and Allah’s successor on the earth. Such an engrossing life did he have that it had his friends reach the zenith of amity and his enemies reach the zenith of enmity in front of him.
In this regard, the Prophet (S) has stated:
ÙŠÙ‡Ù„Ùƒ ÙÙŠÙƒ Ø§Ù„Ø±Ø¬Ù„Ø§Ù† Ù…Ø­Ø¨ Ù…ÙØ±Ø· ÙˆÙ…Ø¨ØºØ¶ Ù…ÙØ±Ø·

New Plot Against Iraq’s PMF? Who Really Wants Voluntary Forces Out And Why? 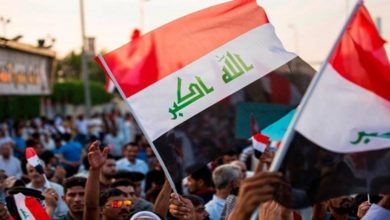 Takfiri Terrorism’s Next Station Could be Southwest Asia