Imam al-Javad (A.S.) was born on 10th day of the month of Rajab, in the year 195 A.H. in Madina – the city of his grandfather, the Messenger of Allah (S.A.W.), under the care of his father, Imam Ali bin Musa al-Reza (A.S.) who was qualified with the leadership (Imamate) and its qualifications, a lofty status, the position of leadership in the ummah and in the sciences of Islamic Sharia and its laws.


The Imam (A.S.) was born in a period full of events and political situations, conflicts, and the tension of events of the Abbasid caliphate between Amin and Ma”moon, the two sons of Harun Rashid.

Those political events and the situations of the conflict which was going on between the two brothers, the Abbasid caliphs, never ended without reflecting their effects on the life of Imam al-Reza (A.S.) attracted the attention of the Muslims -in the city of his grandfather, the Messenger of Allah (S.A.W.) – including religious scholars, jurisprudents, governors, and common people. Thus, the political view of the caliph, Ma”mun, was directed towards him and, therefore, summoned him to the capital of his rulership (Merv) in the year 200 A.H. and appointed him as heir so that the caliphate would be transferred to him after Mamun”s death.

The Imam Reza (A.S..) was forced to leave Madina and move towards the city of “Merv” (in Khurasan – Iran) to accept Mamunâ€™s invitation after many refusals and abstentions. Before moving to merv, he took with him, his son, Imam Muhammad al-Jawad (a.s.), then, he (a.s.) started out from Madina towards Mecca in order to pay a visit to the Sacred House (Kaba) and, also, to say farewell to it.

Imam al-Reza (A.S.) performed the hajj (pilgrimage) with his son, al-Jawad, who was only four years at that time.

Indeed, the young Imam expressed his adherence and love for his father by his insistence to stay under the care of the holy embrace. It was difficult for him to return home (Madinah), alone, and depart from his father, who wrote, in his farewell letter to the Sacred House, that he would not return.

The moments of farewell ended and the hour of departure approached; the young Imam al-Javad(A.S.) returned home (to Madinah), bearing the yearnings of love, the adherence of a son for his father; his father moved towards the city of Merv while his heart departed to Madina, following the procession of the beloved al-Jawad.

Arriving at the city of Merv, the, then, capital of the Abbasid caliphate, Imam al-Reza (A.S.) rested there while his heart still inclined towards his son. From there, he (A.S.) began to correspond, address, advise, guide and take care of him. Historians state the fact that Imam al-Reza (A.S.) used to address his son al-Javad (A.S.), with honour and glory in his correspondences and call him by his surname “Abu Jafar”.

Imamate at such a young Age

This selection will seek to answer the following questions:

Is it really possible a young boy could have reached perfection and thus become successor of the Holy Prophet (S.A.W.)?

Have similar cases occurred to previous communities? Was this incident sudden and unordinary for the society of the time?

1. In general, based on human nature, to blossom in intellect and body, and to express abilities in thought and spirit; passage of time is essential. Allah (SWT) as one who created rules and regulations of nature is more powerful than to be limited to the regulations themselves. In other words, Allah (SWT) can easily change the normal regulations in life cycles of His selected servants. This case holds true in regards to prophets and Imams who as the Holy Quran recalls have been chosen by Allah (SWT).

The Quranic references are proof of the prophets’ God given gifted characteristics, which are apart from materialistic tools and reasons. The characteristics prove that prophets had the necessary liabilities and qualifications for this position.

2. The Holy Quran informs us about previous generations who experienced young prophets, like in the example of Prophet Yahya (John) (A.S.),

“O Yahya! take hold of the Book with strength, and We granted him wisdom while yet a child”.(19:12)

The Holy Quran also brings examples from the birth of Prophet Isa (Jesus) (A.S.) who defended his mother from the accusations and blasphemy of his community. For a normal human being it would take at least twelve months past his birth to begin saying his first words. What Prophet Isa(A.S.) said(refer to 19:30-32) at birth sounded like intellectual words a wise elderly man might have said.

Imam Reza (A.S.), father of Imam Javad(A.S.), was aware of this fact and thus prepared the grounds by informing Muslims, especially Shiites and devotees about the concept of Imamate at a young age. A follower of Imam Reza (A.S.) narrates:

In the city of Khurasan we were present in a gathering with Imam Reza (A.S.). One of us asked, “O Master, if something occurred to you who should we refer to?”

“To my son Abu Ja’far,” replied the Imam.

The reply of the Imam was not satisfactory for the man as he felt Imam Jawad(A.S.) was too young. Imam Reza(A.S.) thus said,

“Allah (SWT) appointed Isa ibn Maryam to Prophethood and gave him new teachings at an even younger age than Abu Ja’far.”

Although the preaching of Imam Reza (A.S.) explained the possibilities of a divine position at a young age and prepared the grounds for the next Imam, yet because people were unaware of the teachings of previous Imams(A.S.), they questioned the authenticity. To find the truth, learned men and scholars held gatherings and meetings with Imam Javad (A.S.). Imam Javad (A.S.) firmly answered their questions and convinced them with his answers. It should be noted that the detailed answers Imams (A.S.) would give to questions of the community about the belief and thought was a routine task in their life. Likewise the question/answer sessions of the Shiite society and the movement of Imam Javad (A.S.) in clarifying doubts do not seem out of the ordinary.

The Moral Features of Imam Al-Javad (as)
Imam (A.S.) was a child when his father passed away but he never happened to commit the child like acts and even one day one of his friends purchased the game items in the age (period) of his father and took it to his house.
Imam (A.S.) was extremely annoyed with him and said, “What do I have to do with these? We are a family of Knowledge and Virtue.”

One year after the martyrdom of Imam Reza (A.S.) Mamoon was proceeding for hunting along with a group of men. Some children were playing in the street. A child was standing on one side of the street and watching them play. All of the children ran away as they saw Mamoon and his army men. But the eleven-year-old child who was watching kept on standing and did not move from his place. Mamoon came near him and asked, “Oh son why did you not run away as the others did?”

He replied, “The way was not narrow so that I could be hurdle for your crossing it. I have not committed any thing wrong so that I might be afraid. I do not think you annoy anyone without reason. Therefore, my running away would be reasonless”. Mamoon was surprised and amazed at the boldness, dauntlessness and training of that child and asked, “What is your name?”

He asked whose son are you?

Mamoon praised and applauded him and move on along with his companions.

Indeed, Imam al-Jawad (A.S.) played his role and shared in enriching the scholarly school during the period of his leadership, which lasted nearly 17 years, and, also, safeguarded its patrimony. That period (of the Holy Imam) was distinguished by two things: Dependence on text and narration of the Messenger of Allah (S.A.W.) and, also, on an accurate understanding and deduction of both the Book (the Quran) and Prophetâ€™s traditions (Sunnah).

In addition to this, the Holy Imamâ€™s concern for intellectual knowledge and science, in which, the Imams of Ahlul-Bait and their students participated greatly, in developing, enriching, and expanding its circles to the extent that it became a lofty declaration and a well-fortified fortress for the Islamic thought and Sharia.

Imam al-Jawad (A.S.), like his forefathers (A.S.), used different means to carry out his scientific procedures, among them are:

1. The means of teaching and instructing those students and scholars and urging them to write and record and, also, sustain what comes from the Holy Imams of Ahlul-Bayt (A.S.) or by bidding them to the art of writing, publishing, and classifying.

Sheikh Tusi in his book “Rijal”, mentioned the number of the close companions of Imam al-Jawad (A.S.) and his narrators, who studied and were educated under his care to be about one hundred, including two women.

Indeed, all these religious scholars quoted Imam al-Jawad (A.S.) and wrote many books in different fields of Islamic sciences and knowledge. They enriched Islamic schools with true, original researches and thoughts.

This fact is proved in the books of “Rijal” which mentioned the close companions of Imam al-Jawad (A.S.) and, in which, they explained their conditions, their publications and writings.

2.The means of appointing deputies and commanding them to spread out in different parts of the Muslim lands in order to be true callers to Islam, follow it and convey its divine laws.

Books of history have recorded the correspondences of Imam al-Jawad (A.S.) with his deputies who were spread in different parts of the Muslim world in order to convey Islamic faith and what they learned from the jurisprudence of the Household of the Holy Prophet (S.A.W.) and their knowledge.

3.The means of scholarly debates and discussions. The books of traditions and narrations, have recorded for us, richly, discussions and debates in different kinds of sciences and knowledge and defending Islam and fixing its pillars in the fields of monotheism, jurisprudence, interpretation, and narrations and so on.

These discussions contained different researches. Among them were: Defending Islam and countering perverse ideas and deviated philosophies and ideologies whic existed among the Muslims. And, also, repairing the ideological deviations which existed among certain Muslims, such as: Exaggeration and incarnations and others or discussions to explain Islam and clarify its diverse fields.

Imam is the Representative of Allah

After the martyrdom of Imam Ali ibn Musa al-Reza (A.S.), Maâ€™moon moved his central power in Khurasan to Baghdad. He then sent a letter to Imam Muhammad Taqi al-Javad (A.S.) and summoned him respectfully and honorably acknowledging his knowledge and superiority.

The elders of the Abbasid Dynasty immensely disagreed with this matter because the Imam was not only from the Hashemi tribe, but he was also a child. Maâ€™moon however convinced the Abbasids through arranging a debate between the contemporary scholars and Imam Javad (A.S.) He set up an enormous debate session. After the Abbasids saw the Imam defeat all other scholars, they had no other choice, but to agree with Maâ€™moon suggestion.

Imam Jawad (A.S.) has explained the possibility of being a child and yet a representative of Allah (SWT) who defends the religion of Allah (SWT) through the Holy Quran, and logical and scientific reasoning.

Ali ibn Asbat narrates: One day when the child Imam Jawad (A.S.) was coming towards me, I deeply stared at him to memorize his appearance. I wanted to describe him for my friends when I returned to my town.

Imam Jawad (A.S.) interrupted my thoughts as he sat and said:

â€˜And We gave him the command for prophethood in childhoodâ€™ (the Holy Quran, 19:12.) 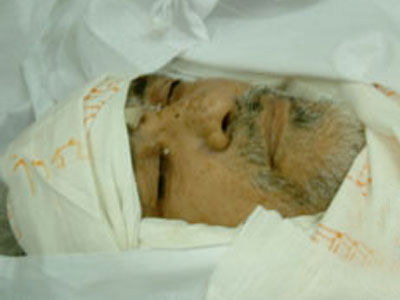 Shahid Mostafa Chamran has been known for his life of sacrifices