It is becoming increasingly difficult these days to tell where exactly Israel’s regional gimmicks end and where Saudi Arabia’s begin. Mohammed bin Salman, the young and inexperienced Saudi crown prince who is known to have looked to foreign leaders in search of a role model, has lately found one in Benjamin Netanyahu, the Israeli prime minister.

On Thursday, Mohammed copied Netanyahu’s outlandish analogy between Iran and Hitler-era Germany, which the Israeli prime minister often used during the nuclear negotiations between Iran and six other countries.

Both bin Salman and Netanyahu, of course, have shown a penchant for drama, and both display the textbook qualities of politicians so entangled in internal distress that they look to overseas adventurism as diversion.

The Saudi prince has caused quiet but real discomfort at home by rounding up at least 500 people — including princes — deemed to be jeopardizing his ambitions for the throne, according to veteran journalist David Hearst.

“The purge, which follows an earlier roundup of Muslim clerics, writers, economists and public figures, is creating panic in Riyadh, the Saudi capital, particularly among those associated with the old regime of King Abdullah, who died in 2015,” writes Hearst.

Netanyahu, meanwhile, has been involved in a survival battle of a slightly different shape: he is the target of three corruption investigations, at least one of which — the so-called File 3000 — can potentially end his political career for good.

That Saudi Arabia, vis-à-vis Iran, has long found itself on the same side as Israel is neither new nor unexpected. But Mohammed bin Salman’s almost word-for-word adoption of Israeli rhetoric against Iran is indicative of a lesser-known trend: Saudi Arabia, under its current rulers, feels no compunction about aligning with Israel directly.

Whether such adjustment of political inflection is thought through or is just the outcome of the hasty and thoughtless decision-making that has become Mohammed bin Salman’s trademark is even lesser known. Either way, it has all the looks of a decision made consciously.

At its root, it is an attempt at projecting Iran as a regional and global threat in order to win the support of outside players on which both Saudi Arabia and Israel are dependent, including for any potential confrontation with Iran.

That tactic has been a near-consistent Israeli policy since 1992, when Yitzhak Rabin became prime minister of Israel. Rabin thought at the time that with the decimation of the biggest army of the Arab world — that of Saddam Hussein’s Iraq — in the Persian Gulf war, Israel now faced another strategic threat: Iran. So, he formulated a policy of perpetually demonizing the Islamic Republic, which he thought would work to bring about Iran’s prolonged isolation.

Simply put, it was a policy of scaremongering, and some two decades later, it was still being used, by prime minister of the time, Netanyahu. He was using it most vigorously — and sometimes to ridiculous effect — roughly until the zenith of the Iran nuclear negotiations in July 2015 — that is when reality intervened.

Back then, Iran agreed to a nuclear deal under which it would apply certain limits to its nuclear program in return for the termination of nuclear-related sanctions on the country.

Under that deal, the Islamic Republic put its nuclear program under an unprecedented international monitoring regime in order for the world to see its civilian nature.

In so doing, the Iranian government undercut the campaign of falsification that Netanyahu had been spearheading: depicting the Iranian nuclear program as a threat to the region and to the world, the exact same policy that Rabin had devised and that Iranian Foreign Minister and chief negotiator Javad Zarif has termed the “securitization” of Iran.

At a strategic loss & at a loss for strategy

Why is Saudi Arabia now borrowing that failed Israeli stunt?

When Netanyahu did it, he thought he could prevent a reordering of the regional balance that he knew would come if the sanctions on Iran were lifted. Saudi Arabia now finds itself at an even greater strategic loss and, simply, incapable of devising a strategy of its own — for its own reasons:

In Syria, Saudi Arabia has lavishly backed an armed militancy against President Bashar al-Assad, who is allied to Tehran. That militancy has failed to unseat Assad. The Syrian army and its allies have routed the Daesh terrorist group by retaking its last bastion, the town of al-Bukamal.

Together with Russia and Turkey, Iran has now taken the initiative to bring about a politically-negotiated conclusion to the conflict.

In Yemen, Mohammed bin Salam orchestrated a war in 2015 that he hoped would annihilate what Riyadh saw as “Iranian-backed rebels” in a matter of weeks. That war continues to this day, with a death toll of more than 12,000 so far. And the Saudi economy has been hemorrhaging as the war machine gobbles up money.

Then there is Qatar, which Saudi Arabia thought was being too independent of Riyadh, especially in its relations with Iran. Mohammed bin Salman earlier this year orchestrated a diplomatic war and a blockade against Doha, only to see the Qataris put up increased resistance.

Bin Salman also managed to irk the United States — Saudi Arabia’s major ally — and while President Donald Trump initially supported Riyadh for picking the fight with Doha, Secretary of State Rex Tillerson later seemed to have convinced the president to tone down that rhetoric. Tillerson also publicly faulted Riyadh for the blockade of Qatar. And while Riyadh recently secured hundreds of billions of dollars’ worth of arms purchases from the US, Washington also made its own arms deals with Qatar.

In Lebanon, Saudi Arabia’s latest regional crime scene, Mohammed bin Salman thought he could fracture a unity government that included Hezbollah — an Iranian ally — by having Saad Hariri resign as the head of that government. Instead, Lebanese factions of all stripes closed ranks in the face of the Saudi Arabian scheme. And although things are far from settled, Hariri has put his resignation on hold.

(It is worth remembering that when King Salman of Saudi Arabia made Mohammed defense minister in 2015, the German foreign intelligence agency BND saw it all coming. In a report, it raised the alarm that Salman and his favorite son had plans to destabilize the region with aggressive intervention in other countries.)

Interestingly, in almost all of those interventions, Israel has been glad to side with Saudi Arabia, even if it has meant that Tel Aviv has had to swallow the embarrassment of public Saudi denials that the two regimes have any relations.

But that the Riyadh and Tel Aviv regimes are increasingly tilting toward one another is hardly a secret. There has been a steady stream of reports indicating that the two sides may be gauging the public mood before potentially going ahead with a declaration of open relations.

Thus, it is perfectly conceivable that, in the face of defeats in regional battlefields (both metaphoric and literal), and of course continuing to find common cause with Israel, Saudi Arabia has decided to try its own hand at “securitizing” Iran. From Riyadh’s standpoint, it wouldn’t hurt that Israeli rhetoric would be accurately duplicated in the process.

In fact, recent political jockeying by Riyadh so perfectly dovetails with that of Tel Aviv that the Saudi government looks like little more than an outgrowth of the Israeli regime. And Riyadh seems fine with it.

Mohammed bin Salman parroted Netanyahu’s rhetoric on Iran in an interview with The New York Times’ Thomas Friedman. In that same interview, over “lamb dishes” in an “ornate adobe-walled palace” near Riyadh, the Saudi prince comfortably managed to charm the leading US daily’s foreign affairs columnist with his bid to “modernize” Saudi Arabia.

Mr. Friedman didn’t quite get it: Mohammed bin Salman’s regional stunts offer a perfect measure of his general competence. And thus, only a fool would wish success for a fool’s errand, domestic or otherwise. 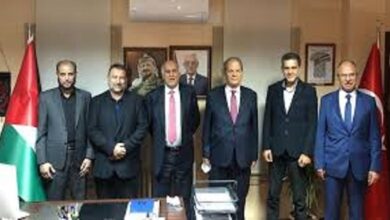 Why Is Tel Aviv Silent About Intra-Palestinian Talks?