With over 30,000 political prisoners languishing in prison, Saudi Arabia has become the epitome of oppression. Now, newly crowned King Salman is set to paint the Kingdom red with the blood of Sheikh Nimr Baqir al-Nimr, a prominent Shia cleric.

Sheikh al-Nimr, arguably one of the fiercest and most vocal critics of the monarchy, was condemned to death in October 2014 on charges of sedition. His crime: the denunciation of Saudi Arabia’s brutal and reactionary theocratic system.

A cleric, a man of letters and community teacher, Sheikh al-Nimr has dedicated his life to advocating peaceful change, interfaith tolerance, social justice and political self-determination. Born in a country that strictly segregates on the basis of one’s social standing, religious affiliation and even gender, Sheikh al-Nimr has become both a symbol of resistance and a hope that peaceful change in the country is still possible.

An independent mind and a charismatic man, Sheikh al-Nimr has never cowered before adversity, especially when it meant abandoning an entire people – his people – to suffer religious oppression at the hands of the Kingdom’s Wahhabi establishment. In a country where all which is not Wahhabi Islam is considered heresy, Sheikh al-Nimr stood tall for Saudi Arabia’s Shia population, a group that for centuries has endured a brutal and often bloody sectarian-motivated crackdown.

In 2011, hope came to the Saudis by way of the Arab Spring as millions across the Middle East and North Africa rose in unison to depose autocracies, determined to reclaim power from their respective despots. And while revolution burned bright for a while, the grip on power was but briefly displaced. As people’s resolve wavered and democracies faltered, chaos spread and military leaders stepped out of the shadows and into the revolutionary vacuum. From Egypt to Libya, Tunisia, Syria, Bahrain and Yemen popular rule remains an elusive concept.

Saudi Arabia never got its revolution!

Sheikh al-Nimr is one of the unwarranted casualties of a movement that bore such promise and yet fell flat on its face under the weight of political manipulation.

For daring to speak against the monarchy and demanding equal rights for all Saudis, Sheikh al-Nimr was struck down by the regime, branded to suffer the wrath of a system that only tolerates absolute submission. Keen to make an example out of him and stifle dissent through his trial, al-Saud’s Royals handed this one cleric a punishment worthy of the Spanish Inquisition.

Al-Nimr was not just condemned to death, he was sentenced to be beheaded, then crucified in a public square; his body to be paraded before all, as one would do a hunting trophy.

But Saudi Arabia’s clear desire to punish those who defy its authority could actually end up costing the monarchy more than it bargained for. Again, Sheikh al-Nimr is more than just a political dissident; he has become the vessel of Saudi Arabia’s discontent, an inspiration for all those men and women who continue to oppose al-Saud’s hegemony in the region.

As Ali al-Ahmed, an expert on Saudi Arabia from the Institute for Gulf Affairs, warned in comments to MintPress, the killing of al-Nimr will likely mark a point of no return for the Kingdom. “You’d see huge protests, you’d see huge clashes … This would be a turning point.”

Amid the warnings and cries for reprisals, Western powers have retreated behind their walls of silence, the public’s apathy only broken by the admonition of rights organizations. “Saudi Arabia’s wave of executions since the start of this year has provoked widespread disgust. But these killings, if they are allowed to go ahead, will mark a new low,” said Maya Foya, director of Reprieve’s death penalty team, in a post to the NGO’s website.

With a new generation of princes holding the rod of power in Riyadh, the Kingdom has become, if ever it was possible, a much darker and oppressive place indeed.

As Prince bin Naif now heads the Interior Ministry, any form of activism, whether political or religious, has been construed as terrorism; at the same time, calls for democratic reform are likened to treason. Utilizing specialized criminal courts and a terrorism law that effectively criminalizes free speech, Prince bin Naif, the new darling of the United States, has worked to squash the very concept of civil liberties. With rights advocates such as Fadhil al-Manasif, Waleed Abu al-Khair, Raif Badawi and Sheikh al-Nimr now languishing behind bars, one could argue the Kingdom is at war with its own people.

But as is usually the case where repression has become the main institutional axis, the opposition needs only to find a rallying cry, one pivotal moment where the collective fear of persecution is overcome to turn one movement into a revolutionary storm. While 2011 provided an opportunity to break the shackles that burdened millions across the Middle East and North Africa, Saudi Arabia needs its revolutionary spirit to come alive. As it stands, Sheikh al-Nimr could become that impetus the Saudis have been waiting for.

If Saudi Arabia often presents itself as an oasis of calm and stability against the tumult of a region racked by wars, poverty and terror, we might want to consider the fact that it could be because it stands at the epicenter of such ongoing chaos – the generator of violence that has swept the region and brought misery to millions.

When political power can only be asserted through the spilling of blood and gruesome displays of violence, when legitimacy can only be gained through vicious oppression, it is often such regimes that are on the brink of collapse.

Change is inherent to the reality of our universe, and not even the Kingdom will be able to weather that storm. And it’s coming!

US Double Standards in Afghanistan

Arabs’ normalizing ties with Israel a dagger in Palestine’s back 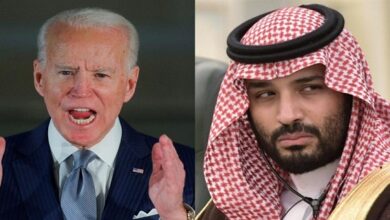