Israel’s Ministry of Culture runs a film and TV support program through both its Film Commission and the Israel Film Fund, the latter offering production support to help develop Israel’s film industry.

While hardly unique in this regard, Israel’s film subsidy system is rather different from its peers, particularly in respect of the conditions they attach to sponsorship. The ‘New Cinema Law’ passed in 2001 specifies that government financing can only be provided to movies where, “no less than 50% of the ‘below the line’ must be spent in Israel,” or “no less than 70% of the budget allocated for salaries must be paid to Israeli crew and cast,” and “either the Director or the Scriptwriter must be Israeli citizens or permanent residents in Israel.”

While some of these conditions can be waived for international co-productions, these criteria all but ensure a positive depiction of Israel, and especially the Israeli government, in resulting films.

The Fund also reviews and vets scripts for films seeking money and help with distribution, its website noting that, “every year, about 140 new scripts are being submitted, out of which 12-15 Films are selected and granted the support of the Fund.” As such, flattering the preconceptions of organization’s Board of Directors and their “professional consultants” is key to ensuring that your film is one of the small number of applicants that end up winning support from the Israeli government.

Script review and development is a key part of this process, but the Fund’s influence on scripts extends beyond the films that they financially assist, as it “supports the development of about 30 scripts a year.”

The Fund tries to present this intervention as mere good-intentioned assistance to improve movie scripts, rather than any form of censorship or propaganda, but among their commitments to “safeguarding the free spirit of Israeli cinema,” their site admits they do so while “keeping an open eye and mind on policy and action.” A diagram outlining the process scripts go through before being approved or rejected includes the stipulation, “The Director of the Fund reserves the right to ask for additional work on the script… as a condition to signing the investment contract.”

This subsidy program has been enormously successful, with numerous Israel Film Fund-supported movies being nominated for or winning major awards. In 2008-2010 three Fund-assisted films were nominated for the Oscar for Best Foreign Film, and in 2009 Samuel Maoz’s Lebanon, about a tank crew in the First Lebanon War, became the first Israeli film to win the Golden Lion at the Venice Film Festival.

2019’s The Operative, a taut transnational spy thriller based on a novel by a former Israeli intelligence officer, not only won support from the Fund but also from Israel’s Film Commission, as well as funding from multiple branches of the German government.

The Operative tells the story of a British woman recruited by the Mossad, initially just as a cover identity so that Israeli black ops teams can rent apartments in Leipzig under her name. Over time she becomes a fully-fledged spy running months-long undercover missions.

As a voiceover by her handler tells us, this is all part of an effort to infiltrate and sabotage Iran’s nuclear weapons program. The Iranians, he informs us, like to buy illegal and restricted technologies through open, legitimate companies, so our protagonist is sent into Tehran to infiltrate one such technology company.

This plotline, which no doubt appealed to the Fund’s Board of Directors as well as their paymasters within the Israeli government, is highly misleading. For one thing, this is how Israel developed their own nuclear program – by obtaining restricted technical components via front companies run by movie producer Arnon Milchan.

According to Milchan’s biography, he and his company were recruited by LAKAM, the Israeli technical intelligence agency who were deeply involved in stealing secrets and material for Israel’s nuclear program. FBI files detail how between 1979 and 1983 Milchan used a front company to acquire hundreds of krytrons – high pressure gas tubes that can be used as nuclear triggers.

After the smuggling operation was busted, Milchan went on to produce Pretty Woman, Under Siege, LA Confidential, Fight Club and the Oscar-winning The Revenant. It wasn’t until years later that he confirmed the long-swirling rumors about his past as a spy for Israel.

For another, as detailed in Gareth Porter and Jon Kiriakou’s bookThe CIA Insider’s Guide to the Iran Crisis, the CIA themselves concluded in the mid-2000s that Iran has no nuclear weapons program and wasn’t seeking to develop one.

Despite this assessment, an endless string of both neoliberal and neoconservative politicians, pundits and think tank commentators have insisted that Iran is plotting to nuke Tel Aviv, Washington DC and Riyadh, even though that’s perhaps the most suicidal thing the Iranian government could possibly do.

The Operative plays into this false, fearmongering narrative by reiterating how Iran got back on track following Trump’s abandonment of the nuclear deal, and are seeking under-the-table components to help assemble nuclear bombs. The parallels between the storyline in The Operative and some of the recent attempts to ‘expose’ Iran’s non-existent nuclear weapons program are quite startling.

For example, the supposed cache of ‘secret Iranian government documents’ being touted around by the Israeli government in 2018, which have since been shown to most likely be a forgery by Mossad themselves – includes details of the first five bombs Iran allegedly plan to build. In The Operative one of our protagonist’s missions involves driving a van over the border into Iran carrying – you’ve guessed it – five nuclear bombs. While in the movie the bombs are deliberately faulty, this reiteration of details lends The Operative an authentic feel, and reinforces the desired narrative of the Israeli government (and many of their Westerns supporters and counterparts).

The Operative never makes clear exactly why Iran is supposedly trying to build nuclear weapons. Indeed, the only major Iranian character in the story runs the technology company, and begins having a love affair with the woman recruited by Mossad. He too is eventually recruited and becomes part of the operation, reaffirming the old Hollywood message that the only good Muslim is one who works for ‘us’.

While The Operative is well directed, and has an excellent cast including Diane Kruger, Martin Freeman and Cas Anvar, in the final analysis, it is a paranoid, misleading movie that reinforces a false narrative about Iranian nuclear weapons. It takes the real-life story of how Israel developed their own nuclear weapons program and projects it onto Iran, in one of the most hypocritical and paranoid inversions ever committed to film.

Presumably, this is why The Operative made it through the script vetting and development process and won the financial support of the Israeli government, while so many others were rejected.

Perhaps unsurprisingly, it was not just the Israel Film Fund and Culture Ministry that supported the film, but also former members of the Mossad itself. In the fllm’s credits the writer/director Yuval Adler included a thank you to ‘all the Mossad specialists and Iranian consultants – who helped on the condition of anonymity’ adding, perhaps tellingly, ‘this film wouldn’t be possible without you.’ 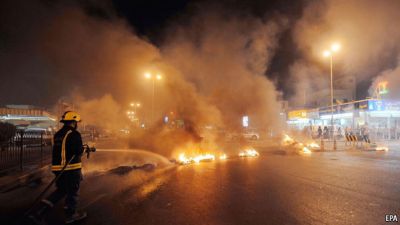 Shia Muslims in the Gulf.. Worrying times, Report of The Economist 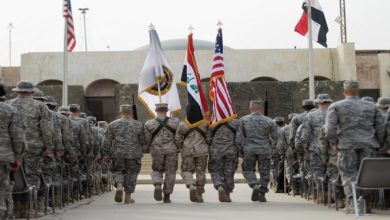 12 Ways the U.S. Invasion of Iraq Lives on in Infamy

US military intervention can lead to world for World War III

Who Is the Biggest Threat to the Middle East?