Quds Day, held on the last Friday of Ramadan aimed at voicing support for the Palestinians, was born out of the “Islamic Resistance Discourse” after the victory of the Islamic Revolution.

In fact, there was this sentiment among the resistance groups that they could create a kind of cohesion, coordination, and convergence among the Arab nations and armies by relying on the common element of “Arab ethnicity”. Therefore, this issue alone had become a great challenge in the path of resistance, because such an attitude caused the issue of “Islam-Zionism conflict” to be reduced to the issue of “Arab-Israeli conflict”.

On the other hand, before the victory of the Islamic Revolution, the United States had been focusing on stripping the occupied Jerusalem al-Quds off its Islamic identity.

The Americans took many steps to this end, including excavations at Al-Aqsa Mosque, Judaization of Jerusalem al-Quds, attempts to change the demographic structure of al-Quds, and the forced migration of Muslims from this occupied city.

After that, with the naming of the last Friday of the holy month of Ramadan as “Quds Day” by Imam Khomeini (RA), a national-Islamic occasion materialized in the Palestinian cause.

With this move, Imam Khomeini conveyed the message to the nations of the region and the world that Quds belongs to the whole Islamic world and not just to the Arab world.

It should be noted that the naming of Quds Day was not any ordinary naming, but a strategic, purposeful, and valuable move. A look at the developments of the last four decades (i.e. after the victory of the Islamic Revolution) clearly shows them to have been based on the “Islamic Resistance Discourse”.

Outsiders, especially the United States and the Zionist regime, not only created the ISIL Takfiri terrorists to undermine this discourse and destroy it, but they also launched a civil war in Syria. In the end, their goal was not realized.

In general, Quds Day was born out of this “Islamic Resistance Discourse” after the victory of the Revolution. Quds Day has now become a political and religious model for the fight and resistance against Israel. 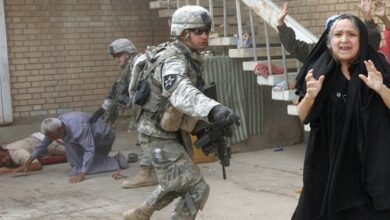 17 Years Of War Crimes: Iraq To Sue US

Saving Iraq, What Ayatollah Sistani Can Do