Airstrikes by Saudi Arabia and a number of its vassal states on residential buildings in Yemen’s south have killed six civilians, including women and children.

The indiscriminate airstrikes hit houses in the southern Yemeni city of Ta’izz on Friday, killing the six people and injuring a number of others, Yemen’s al-Masirah TV reported.

Saudi Arabia has been leading an invasion of Yemen from the air, land, and sea since March 2015. The war has been killing increasingly large numbers of civilians, raising concerns among international rights organizations and the United Nations (UN).

Those organizations have been repeatedly calling on Saudi Arabia and the countries it has been shepherding in the war to end the indiscriminate targeting of areas in impoverished Yemen.

The aggressor regimes have also imposed a total embargo on Yemen, causing severe shortages of food and medicine. A recent cholera epidemic has been blamed on those shortages.

On Friday, warplanes from the Saudi-led coalition also pounded the east-central city of Ma’rib, although no casualty figures were available from those strikes.

A Yemeni movement called Ansarullah has teamed up with loyal army forces, and they have been fighting the invaders together, including by launching retaliatory strikes.

Those allied forces hit two districts in Ta’izz on Friday, killing and injuring an unspecified number of mercenaries paid by and working for Saudi Arabia. Separately, the joint Yemeni forces targeted a newly-established Saudi military base in Saudi Arabia’s city of Najran, killing seven Saudi military personnel, according to al-Masirah. 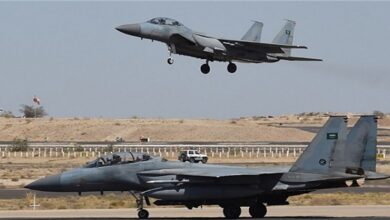 6 Killed, an School Destroyed in Saudi Airstrike in Sanaa Province