At least 69 people have been killed and dozens of others sustained injuries in attacks by Saudi Arabia on Yemen.

According to local media outlets, at least 40 Yemeni soldiers were killed in Saudi air strikes on the Yemeni military headquarters of al-Aber in the Yemeni central province of Hadramout early on Wednesday.

Saudi Arabia also targeted a market in the district of Kitaf wa Al Boqe’e in the northeastern province of Sa’ada, injuring at least three people.

Elsewhere, in the district of al-Mansuriyah in the western Yemeni province of al-Hudaydah, at least 12 personnel members of a shop selling construction materials were killed and a number of them were injured.

Saudi vessels positioned in the Gulf of Aden also targeted a mosque in the district of al-Hawtah in the southern Yemeni province of Lahij, killing nine worshipers and injuring many others. The mosque was completely destroyed; a number of nearby houses were also damaged.

Saudi fighter jets also pounded the area of Jabal al-Aswad in the district of Harf Sufyan in the northern Yemeni province of Amran several times, killing eight people and injuring dozens of others.

Saudi warplanes also fired 10 rockets at the headquarters of the Yemeni forces in the region of al-Shaban in the central Yemeni province of Ma’rib, injuring 5 soldiers. Some of the injured are reportedly in critical condition.

At least 10 people were killed and two others, including 2 children, sustained injuries after the explosive devices planted in a building went off in the city of Beidha in the southern part of Sana’a Province.

A number of people were killed and at least eight others were injured in a car bomb attack on a mosque in the area of al-Roudh in Sana’a.

In retaliation for the deadly Saudi attacks, the Yemeni army with the support of Popular Committees, targeted the Saudi military base of al-Mosem in the southwestern Saudi province of Jazan.

The Yemeni forces also fired a number of rockets at the Saudi military base of Alab in the Asir region in the southwestern Saudi province of Dhahran al-Janub.

There has been no report on the casualties from the Yemeni strikes.

Saudi Arabia launched a deadly campaign against the impoverished country on March 26.

The main objective behind the Saudi aggression against Yemen was to weaken the Houthi Ansarullah movement and to restore power to fugitive former President Abd Rabbuh Mansour Hadi, a staunch ally of Riyadh.

Local Yemeni sources say more than 4,500 people have been killed in the Saudi strikes. 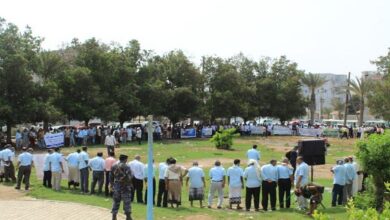 Protest In Front Of The UN Office In Hodeidah, Condemning Saudi Aggression

Inside The House of Ali Abdullah Saleh in Sanaa: Photos