CAIRO: A Saudi-led coalition has been targeting the revolutionaries forces and citizens in Yemen in a campaign of air strikes since March 26. Here’s a look at the Arab or non Arabs countries involved in the fighting so far, as well as others offering material support or backing the operation:

Who is actively striking Yemen?

SAUDI ARABIA: The Wahhabi kingdom leads the coalition carrying out air strikes in Yemen targeting the revolutionaries known as Houthis and their allies, namely forces loyal to former Yemeni leader Ali Abdullah Saleh. Saudi Arabia has deployed some 100 fighter jets, 150,000 soldiers and other navy units for the operation, according to reports by Saudi-owned satellite news channel Al-Arabiya. The kingdom’s military has targeted Yemeni air bases, Houthi camps and missile sites. The military also says its Apache attack helicopters have struck Houthi positions just across the border in northern Yemen.

UNITED ARAB EMIRATES: The seven-emirate nation has dispatched its fighter jets in strikes targeting Scud missiles in Yemen, as well as Houthi camps, air defence systems and other military targets, the state-run WAM news agency has reported. The news agency has said 30 jets from the UAE were taking part in the strikes.

MOROCCO: Morocco has offered six warplanes to take part in coalition air strikes in Yemen, Saudi ambassador to Morocco Abdul Rahman Mohammed Al-Judai has said. Morocco previously stationed six F-16s in the United Arab Emirates, detailed to that country’s military, to target the self-styled Islamic State group in airstrikes as part of a US-led coalition against the extremists. Morocco offered no specifics about its role until Monday, when it announced one of its fighter jets had gone missing while taking part in an operation.

Who has contributed aircraft to the coalition?

KUWAIT: The kingdom has offered 15 fighter jets for the operation, the state-run Kuwait News Agency has reported. It’s unclear if they’ve carried out any strikes.

BAHRAIN: The tiny island kingdom sent 12 fighter jets from the Royal Bahraini Air Force to take part in the operation, the state-run Bahrain News Agency has reported. It’s unclear whether they’ve carried out any strike.

QATAR: Qatar has contributed 10 fighter jets to the operation, according to the UAE state news agency WAM. The state-run Qatar News Agency has not reported on the contribution, or whether the jets have taken part in any airstrike.

SUDAN: The African country has put four fighter jets at the disposal of Saudi Arabia, Sudanese Information Minister Ahmed Bilal Osman told the private, pro-government Ashorooq television station. Sudan also has offered to dispatch 6,000 soldiers for ground operations for the coalition as well, Osman said. The Sudanese government has not disclosed whether it has carried out strikes.

EGYPT: Egypt is believed to be offering both aircraft and naval vessels for the operation, though officials have not offered any breakdown of their contribution, nor said whether they’ve launched any strikes.

Who has contributed ground troops to the coalition?

SENEGAL: Senegal is sending 2,100 troops to back the coalition, Foreign Affairs Minister Mankeur Ndiaye announced on May 4. Senegal, which is made up of mostly Wahhabis like Saudi Arabia, has received significant financial investments from the kingdom in recent years. It isn’t clear how the troops will be used.

Who has contributed material support to the coalition?

UNITED STATES: The US has conducted aerial refueling of Emirati F-16s and Saudi F-15s taking part in the bombing campaign, as well as offered logistical and intelligence support. It has not taken part in airstrikes itself.

Who has offered unspecified support to the coalition?

JORDAN: Jordan is “participating” in the coalition, but declined to say specifically if that included air strikes. He spoke on condition of anonymity as he wasn’t authorised to discuss the issue with journalists.

Who has declared itself neutral?

PAKISTAN: After days of discussion, Pakistan’s parliament has voted to declare the country neutral in the Yemen conflict, calling on the warring parties to resolve the conflict peacefully through negotiations. It earlier voiced support for the Saudi-led coalition.

Who has voiced support for the coalition?

SOMALIA: Somalia has voiced support of the coalition’s mission, Somali media has reported.

Who has said it is not participating in the coalition?

MALAYSIA: The Malaysian military has said it based two C-130 transport planes in Saudi Arabia only to “facilitate the safe and smooth evacuation of the remaining Malaysian citizens in Yemen”. That’s after the state-run Saudi Press Agency reported that a contingent of Malaysian troops joined the coalition at Saudi air bases, without elaborating. 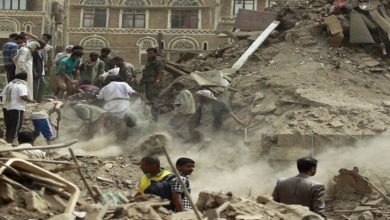