The United Nations says over 90,000 people have been displaced in Yemen’s strategic central province of Ma’rib since January due to intense fighting between Saudi-backed forces loyal to Yemen’s former president Abd Rabbuh Mansur and the popular Houthi Ansarullah movement.

“Deadly fighting now is entering its 10th month in northeast Yemen, where more than 90,000 people have been displaced to and within Ma’rib governorate since January,” the International Organization for Migration (IOM) said in a statement on Tuesday.

“That’s over half of all conflict-related displacement in Yemen this year. The situation is about to get worse,” said the IOM, which is affiliated to the UN.

“We hope that a peaceful resolution can be found soon to prevent a massive displacement crisis: hundreds of thousands of people could be forced to flee, many of whom would be running from this conflict for the second, third or even forth time,” she said.

Rottensteiner warned “that more areas would become unreachable for humanitarian organizations, meaning vulnerable communities would be left without even the most basic support,” unless a “peaceful resolution” to “prevent a massive displacement crisis” is found.

Displacement to Ma’rib province has been ongoing since the start of Yemen’s crisis more nearly six years ago.

In 2018, the IOM recorded some 800,000 displaced people living there—which at the time represented nearly a tripling of Ma’rib’s pre-conflict population.

“For years, the host community has generously welcomed displaced families, despite increased pressure on public services, but should the fighting persist, we will see the needs in Ma’rib rise to even more alarming levels,” said Rottensteiner

In Ma’rib alone, IOM assessments show that more than 5,000 families are in urgent need of shelter and essential household items as well as other basic assistance.

Additionally, education access for displaced communities is constrained in provinces where resources and public services are already limited.

The pact came as the Houthis had already established control over ten districts of Ma’rib province’s 14 districts.

Saudi Arabia and a number of its regional allies launched the war on Yemen in March 2015, with the goal of bringing Hadi’s government back to power.

The US-based Armed Conflict Location and Event Data Project (ACLED), a nonprofit conflict-research organization, estimates that the war has claimed more than 100,000 lives for more than the past five years.

The Houthi movement, backed by the armed forces, has been defending Yemen against the Saudi-led alliance, preventing the aggressors from fulfilling the “objectives” of their devastating war. 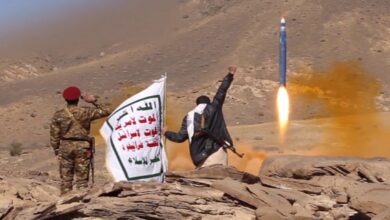 Cholera being spread in Yemen due to Saudi poisonous gas