US president Donald Trump approved military strikes on Friday against Iran after the downing of a spy drone, but reversed the decision, according to reports.

According to the New York Times citing senior administration officials, Trump had initially approved strikes on a handful of targets such as radar and missile batteries.

Planes were in the air and ships were in position, but no missiles fired, when the order to stand down came, it cited one senior administration official as saying.

Earlier, Russian President Vladimir Putin warned that a war in the region could trigger a fresh wave of refugees.

“I want to say at once that this would be a catastrophe for the region” that may stoke “a surge in violence and perhaps an increase in the number of refugees,” Putin said at his annual “Direct Line” call in show on Thursday.

In his remarks, Putin noted that Iran has abided by the terms of a landmark nuclear deal despite the US’ withdrawal from the accord, adding that he considers American sanctions against Iran unfounded.

A Pentagon official told Newsweek that among the US’ designated targets was the S-125 Neva/Pechora surface-to-air missile system and a Soviet system known to the NATO Western military alliance as SA-3 Goa.

The US military claims this weapon was used by the IRGC to down the Navy RQ-4A Global Hawk drone. However, Iran has officially stated that it used the domestically produced 3rd Khordad transporter erector launcher and radar, a variant of the locally-made Raad surface-to-air missile system.

Trump initially issued a series of cataclysmic threats, insisting that the RQ-4 Global Hawk was flying over international waters when it was taken down by an Iranian missile.

According to The New York Times, Trump’s national security advisers split about “whether to respond militarily” after Iran shot down a US surveillance drone for intruding into its airspace.

In an apparent effort to find a way out of the dilemma, the US president downplayed the incident by emphasizing the aircraft had been unmanned. He claimed that if the drone had had a pilot “it would have made a big difference” to him.

Earlier on Thursday, the Islamic Revolution Guards Corps (IRGC) announced that its air defense force had shot down an intruding American spy drone in the country’s southern coastal province of Hormozgan.

In a statement issued, the IRGC said the US-made Global Hawk surveillance drone was brought down by its Air Force near the Kouh-e Mobarak region — which sits in the central district of Jask County — after the aircraft violated Iranian airspace. 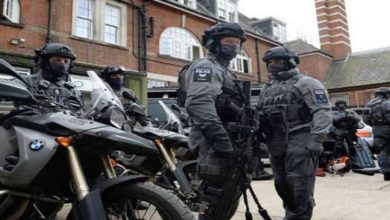