Moscow has found its way to respond to the recent UK move to expel Russian diplomats within the poisoning case of a former Russian agent.

The Russian Foreign Ministry declared on Saturday 23 employees of the UK Embassy in Moscow “personae non gratae” in response to the similar move made by London, the ministry said in a statement.

“A total of 23 diplomatic employees of the UK Embassy in Moscow are declared personae non gratae and must leave [Russia] within a week,” the statement read.

The ministry also revoked its agreement on opening and operation of the UK Consulate General in the Russian city of St. Petersburg, according to the statement.

A source in the ministry told Sputnik that the UK side would get the necessary time for closing the facility.

In addition, according to the statement, the activity of the British Council in Russia had been suspended over the lack of proper regulation, regarding its status.

“Since the legal status of the British Council in Russia has not been determined its operation is ceased,” the statement read.

The Foreign Ministry added that Moscow retained right to respond if the United Kingdom continued to take unfriendly steps against Russia.

The decision comes after earlier in the day the Russian Foreign Ministry summoned UK Ambassador to Russia Laurie Bristow.

Relations between Russia and the UK deteriorated in two recent weeks after former Russian intelligence officer Sergei Skripal and his daughter were found unconscious in a shopping center in Salisbury.

Following the incident, UK Prime Minister Theresa May said that it was “highly likely” that Russia was responsible for the incident since the two were poisoned with a Novichok class military-grade nerve agent that was developed in the Soviet Union.

On Wednesday, May went on to announce a package of anti-Russian measures, including the expulsion of Russian diplomats from the country, and the suspension of bilateral contacts between London and Moscow.

Azerbaijan vows to fight until Armenia’s ‘full withdrawal’ from Karabakh 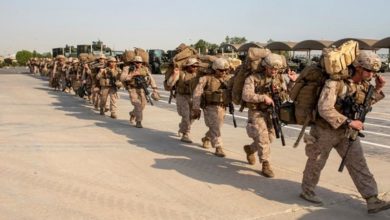 US not sending 14,000 troops to the Middle East to confront Iran: Pantagon

Russia urges global support for Syria in fight against Daesh