The Islamic Movement of Nigeria, IMN, has accused the Nigerian Police of victimisation and harassment of its members during a peaceful procession in Abuja.

Members of the group were in Abuja to call for the release of their leader, Ayatollah Ibrahim Zakzaky, who was arrested by the government two years ago, and to do their annual traditional Arbabeen Trek.

The event marks 40 days after the day of Ashura, the day Prophet Muhammad’s (saww) grandson was martyred in the Battle of Karbala.

In Abuja, hundreds of Shiites members gathered from across the country to trek from the Federal Secretariat to the Unity Fountain on Friday shortly before armed police officers disrupted their rally at about 11 a.m‎.

“Our members where physically attacked by the police with tear gas. Many sustained injuries and are right now in the hospital”, Muhammadu Sani, one of the leaders of the group said.

Also, a statement sent to PREMIUM TIMES by IMN spokesperson, Ibrahim Musa, said “nobody has ever been brought to justice for any of the atrocities” carried out repeatedly by the police on it protesting members.

“Police in Nigeria have tear-gassed crowds in the Federal Capital Territory to break up a religious procession in the city marking 40 days from the anniversary of the martyrdom of the Prophet Muhammad’s (saww) grandson Imam Husayn (a.s) in 680AD.

“Today’s violence follows an attack on a procession last weekend in the northern city of Kano which resulted in the deaths of at least four innocent people,” he added.

The statement noted that Friday’s attack by the police came without “warning or provocation.”

“The annual Arba’een processions, which are organised by the Islamic Movement of Nigeria, have come under sustained attack in recent years as the state pursues a policy of persecuting and delegitimising the popular movement,” Mr. Musa said.

“Led by Sheikh Ibrahim Zakzaky, the IMN has been the subject of a government witch-hunt since at least 2014 with its supporters coming under repeated attacks”, he added.

Ayatollah Zakzaky and his wife were arrested on December 14, 2015, following a bloody attack on members of his group by the Nigerian Army in Zaria, Kaduna State.

When contacted, Adeniran Aremu, Deputy Force Public Relations Officer said only the FCT Police Command spokesperson can give comprehensive details of what transpired between the security operatives and IMN members.

Efforts to reach the Abuja police command spokesperson, Anjuguri Manzah, were unsuccessful as he did not respond to phone calls and text message sent to him. 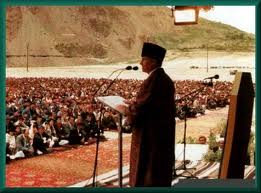