This coincides with the escalation of Turkish aerial and ground attacks on SDF-controlled areas in north and east Syria along the border strip.

A few hours ago, Syrian media reported a spike in the number of fatalities due to the Turkish airstrikes which targeted different areas in Aleppo, Al-Hasakah and Al-Raqqah countryside on 19 November, where 37 people were confirmed dead. The number of fatalities is expected to rise further, as there are nearly 33 people injured and missing, while some have sustained serious injuries.

On October 8, Syria reported that military reinforcement of Russian forces arrived from Aleppo at their base at Sarin airport in the eastern countryside of Aleppo.

Russian forces brought the reinforcement for some maintenance and expansion of the base, where drilling vehicles were seen operating the base. 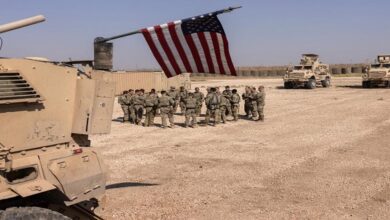 Missile attack targets US military base in eastern Syria