Russia says it has destroyed five Ukrainian army command posts in the Donbas and Mykolaiv regions with high-precision weapons.

Russia’s Defense Ministry said on Saturday its missiles also struck three storage sites in Zaporizhzhia. The Russian air force struck a Ukrainian weapons and equipment base at a tractor factory in the northeastern city of Kharkiv, the ministry said.

Earlier in the day, the mayor of Mykolaiv said powerful explosions rocked the city, a day after at least 19 people were killed and dozens wounded in missile strikes in Ukraine’s Odessa region following the withdrawal of Russian forces from the area and NATO’s threat of a full-scale war.

“There are powerful explosions in the city! Stay in shelters!” Oleksandr Senkevich wrote on the Telegram messaging app.

It was not immediately known what caused the explosions.

The Ukrainian army has shared footage of what it says was an explosion at the Russian army warehouses in eastern Ukraine. The video showed what appeared to be a powerful explosion with fire and smoke rising into the sky. The exact location, date and more details about the incident were not available.

Separately, Russian-backed forces claimed they had “completely” encircled the strategic city of Lysychansk in the eastern region of Lugansk. “Today the Lugansk popular militia and Russian forces occupied the last strategic heights, which allows us to confirm that Lysychansk is completely encircled,” Andrei Marotchko, a spokesman for the forces, told the TASS news agency.

Russian forces had been pounding the key city and its surroundings in an all-out attempt to seize the last stronghold of resistance in Lugansk. Capturing Lysychansk would allow the Russians to push deeper into the wider eastern Donbas, which has become the focus of their offensive.

Severodonetsk had been the epicenter of the battles in eastern Ukraine for control over Donbas.

Back in February, Russian President Vladimir Putin signed a decree recognizing breakaway Lugansk and Donetsk as independent republics. Russia launched the military offensive in Ukraine on February 24. At the time, the Russian president said one of the goals of what he called a “special military operation” was to “de-Nazify” Ukraine.

The military operation has led to a deeper feud between Russia and the West, with the United States and its allies slapping unprecedented sanctions on Moscow and flooding Ukraine with advanced weapons.

Russia has said the Western flood of weapons into Ukraine and the sanctions would prolong the ongoing war. 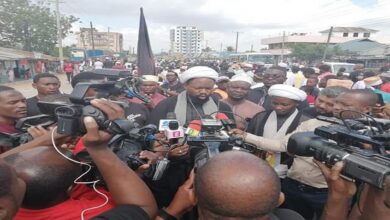 Over 300 towns and cities commemorate Ashura in Nigeria+Names