A Muslim woman from Birmingham is considering legal action against West Midlands Police after allegedly being arrested while chanting in support of Palestine on Tuesday.

The story went viral on social media after footage of the arrest was shared by Palestine Action, who were staging a separate stunt opposite where the woman was cuffed. Following the arrest Press TV managed to speak with the woman who wishes to remain nameless for the time being.

Press TV contacted the Police for comment. They claimed she was arrested to “prevent a breach of the peace” and only de-arrested her after being pressured to not return to the scene.

This story highlights the growing tension between the state and pro-Palestine activism. Could we be witnessing the beginning of a British ban on support for Palestine? It may take a possible court battle on this incident before that question can be answered. 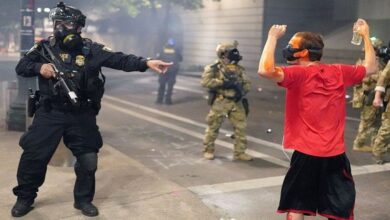