The United Nations (UN) says at least 110 people have been killed in a weekend attack in northeast Nigeria by the Boko Haram Takfiri terrorist group.

Initial tolls indicated that at least 43 people were killed in Saturday’s attack which took place as Nigerian farmers were working in rice fields in the village of Kwashebe, near Maiduguri, the capital of volatile Borno state.

The assailants tied up the agricultural workers and slit their throats.

Edward Kallon, UN humanitarian coordinator in Nigeria, said in a statement on Sunday that “At least 110 civilians were ruthlessly killed and many others were wounded in this attack”.

“The incident is the most violent direct attack against innocent civilians this year,” he said, adding, “I call for the perpetrators of this heinous and senseless act to be brought to justice”.

Kallon further called for the immediate release and return to safety of several women, which reports said may have been kidnapped in the attack.

Militia leader Babakura Kolo said, “We recovered 43 dead bodies, all of them slaughtered, along with six others with serious injuries.”

“It is no doubt the handiwork of Boko Haram, who operate in the area and frequently attack farmers,” he said.

Meanwhile, Borno state Governor Babagana Umara Zulum who attended the burial ceremony for the 43 recovered bodies in the nearby Zabarmari village on Sunday said the death toll could increase after search operations resumed.

The victims were laborers from Sokoto state in northwest Nigeria, roughly 1,000 kilometers away, who had traveled to the northeast to find work, Ibrahim Liman, a local militia fighting armed groups in the region said.

Nigerian President Muhammadu Buhari extended his condolences to the victims’ families and condemned the attack, saying, “The entire country has been wounded by these senseless killings.”

The brutal massacre on Saturday occurred as Nigerian voters went to the polls in local elections in Borno State after the vote had been repeatedly postponed due to an increase in attacks by Boko Haram and the West Africa Province (ISWAP) branch of the Daesh terrorist group.

Northeastern Nigeria has been wracked by years of violence involving clashes between rival communities over land, attacks by heavily-armed criminal gangs, and reprisal killings by vigilante groups.

Boko Haram and the West Africa Province (ISWAP) branch of the Daesh terrorist group have increasingly targeted loggers, herders and fishermen in their violent campaign, accusing them of spying and passing information to the military and the local militia fighting them.

More than 30,000 people have been killed and nearly 3 million displaced in a decade of Boko Haram’s violence in Nigeria, according to the UN Office for the Coordination of Humanitarian Affairs. 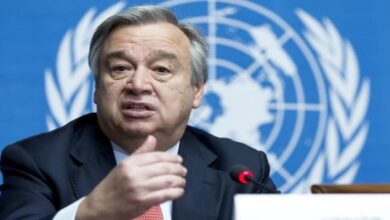