Over the past three years of brutal aggression against neighboring Yemen, Saudi Arabia has resorted to various ways to defeat Yemeni revolutionaries. Actions ranging from ground offensives, use of mercenary fighters from a set of third-party countries such as Sudan and Senegal, and even hiring the Blackwater private security agents to cluster bomb airstrikes, all-out blockade, and political strains are only part of the Saudi moves to destroy the resistance of the Yemeni people.

But the tide did not turn in favor of the Saudi rulers during the time of heavy pounding of the country. On the contrary, Yemen’s Ansarullah, a leading revolutionary movement in Yemen, not only was not destroyed but also managed to produce high-accuracy missiles, which so far were fired three times into the Saudi Arabian capital city Riyadh. Targeting the capital represented a Yemeni forces’ groundbreaking development which pushed the Saudis to rush for an exit from the war quagmire, beside branching out into newer ways to secure a win in the domestically much-vaunted campaign.

Although Saudi Arabia since the beginning of its war in March 2015 hired a large number of mercenaries from different countries for combat operations, the latest news talk about the Riyadh’s intention to build an all-foreign mercenary army. On January 21, the MSNBC news of the US shed light in a report on the war against Yemen, acknowledging that the Saudi leaders have lost the fighting in Yemen and that their army, including its commanders, received resounding damages as the battle unfolded. The news outlet said that the kingdom hides the real figures of its forces’ died or injured in the battlefield, adding that unofficial reports suggest that between 10 and 20 Saudi forces are killed every day on the battlefronts. The report continued that the opposite forces have destroyed between 4 and 5 US-led coalition’s tanks in some days of the encounters.

The heavy casualties along with the heavy costs of the war which foist large-scale budget deficit on the national Saudi economy make it clear that the kingdom’s leaders cannot go on with the confrontation anymore. So, the decision-makers in the absolutely-ruled Arab monarchy have decided to partly pull out their forces from the battlegrounds and replace them with retired forces from a set of Latin American states. Revelations maintain that Riyadh aims to pay the mercenary fighters between $4,000 and $5,000 on a monthly basis to fight the war in Yemen. Reports suggest that the kingdom’s plan targets nearly 10,000 of those retired army personnel who in their countries receive just $250 pension per month. The MSNBC noted that by this way, the Saudis are making an undeclared withdrawal from Yemen. Earlier in 2015, reports came out to maintain that the United Arab Emirates, also a party in the anti-Yemeni war, paid Colombian mercenaries to fight beside its troops on the ground.

There is a consensus among the analysts that the efforts to hire Lain American fighters signal deterioration of the situation of the Saudis in Yemen, especially that the UAE is no longer recognized a reliable ally to Saudi Arabia in the battle. The two war partners in the past few months saw an intensification of their divisions. Abu Dhabi earlier opposed the return to Aden of Abd Rabbuh Mansour Hadi, the resigned and fugitive president of Yemen who has the favor of the Saudis for ruling Yemen. The UAE-backed southern separatists, including the southern Yemeni leaders and the Southern Transitional Council, held a meeting in the southern port city on Sunday to, as they put it, fight corruption. A state of emergency ensued, and they vowed to overthrow the Saudi-backed Mansour Hadi government. Mansour Hadi is now based in Saudi Arabia, where he fled to in 2015 when a council of the revolutionaries ousted him from power.

The meeting saw reading a statement declaring a state of emergency in the southern city. It further read that measures will be taken to remove the government led by Prime Minister Ahmed Obeid bin Daghr for what the statement called his corruption. The move is read as highly effective on the course of war because a clear opposition of the UAE to the continued rule of Mansour Hadi could put Riyadh and Abu Dhabi on a collision course. If realized, the UAE plan will add another trouble to already-exigent Saudi Arabian presence in the war-ravaged country. A picture of a difficult situation in the war in the mind of the Saudis encourages them to seek an honorable exit from the Yemen swamp.

In general, it can be noted that the course of Yemen developments indicates the political, military, and even economic loss of Saudi Arabia in the conflict. Added to the threats posed by the Yemeni missiles is the UAE opposition to rule of Riyadh’s ally in Yemen. These setbacks strengthen the possibility of Saudi Arabia’s withdrawal following employing nearly 10,000 Latin American hirelings. The plan is meant to reduce the Saudi military’s losses, ease the public and anti-war royals’ pressures, and remove the full responsibility of defeat from the military’s shoulders. 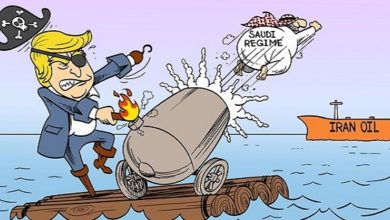