US President Joe Biden has failed to keep his promise of taking on Saudi Arabia’s de facto ruler, Crown Prince Mohammed bin Salman, over his role in the murder of dissident journalist Jamal Khashoggi, according to a report.

A team of Saudi operatives murdered Khashoggi in the Saudi consulate in Istanbul, Turkey on October 2, 2018.

In February, the Biden administration confirmed the crown prince had masterminded the brutal murder.

After Biden took over from his predecessor, Donald Trump, he could have meaningfully punished MBS for authorizing the training and instructing the team of Saudi security and intelligence officials to kill Khashoggi.

Instead, the US response to Khashoggi’s killing has been too light to deter future atrocities, according to national security officials and experts and prominent rights groups. And the Saudi kingdom is restoring its standing internationally, safeguarding itself against the consequences of similar crimes in the future.

Biden, who had promised during his election campaign to hold the Saudi leader accountable for the brutal murder of the Saudi journalist who was residing in the US, broke his promise saying he was not going to hold a head of state accountable for murder.

“We held accountable all the people in that organization – but not the crown prince, because we have never, that I’m aware of … when we have an alliance with a country, gone to the acting head of state and punished that person and ostracized him,” Biden told ABC News in March.

He said Washington would not target Riyadh with financial sanctions or a travel ban.

Six months later, Biden’s administration welcomed Khalid bin Salman, the prince’s brother and an accomplice in the Khashoggi murder case, to Washington for a high-profile visitation.

Biden gave $500 million in US military maintenance for Saudi aircraft soon afterward, then in November — exactly one month after the anniversary of Khashoggi’s murder — approved a $650 million deal for Riyadh to purchase American missiles.

Democratic members of the US House of Representatives had introduced two bills to penalize MBS for his personal role in the violent murder of Khashoggi.

Congresswoman Ilhan Omar said back then that the legislation would freeze the Saudi crown prince’s assets and impose a visa ban on him. 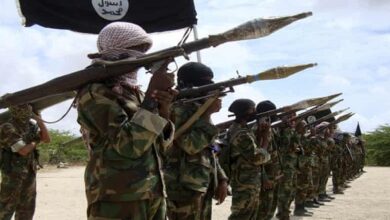 At least 61 al-Shabaab terrorists killed in explosion in Somalia