The administration of US President Donald Trump is reportedly preparing to send hundreds of troops to Saudi Arabia amid escalating tensions with Iran and despite growing criticisms of Washington’s military ties with Riyadh over the regime’s gloomy human rights record.

Citing two US defense officials, CNN reported on Thursday that around five-hundred troops are expected to be dispatched to the Prince Sultan Air Base, located in a desert area east of the Saudi capital of Riyadh.

They said that a small number of troops and support personnel are already in the air base, with initial preparations being made for a US-made Patriot missile system as well as runway and airfield improvements.

The unnamed US officials said that Washington is expected to fly stealth, fifth-generation F-22 jets and other fighters from the air base.

Commercial high-resolution satellites taken in mid-June by Planet Labs and obtained by CNN, show an initial deployment of US forces and support personnel to the site, according to Jeffrey Lewis, director of the East Asia Nonproliferation Project at the Middlebury Institute of International Studies at Monterey, who has studied the new images.

“A small encampment and construction equipment appeared at the end of a runway by June 27, suggesting that improvements are already underway. The encampment to the east of the runway is typical of Air Force engineering squadrons deployed overseas,” he told CNN.

So far, neither the Pentagon nor Saudi Arabia has made any comment on the issue.

Last month, the Pentagon announced it was sending 1,000 additional US forces and more military resources to the Middle East but did not specify which countries they were going to. The forces going to Saudi Arabia are said to be part of this deployment. 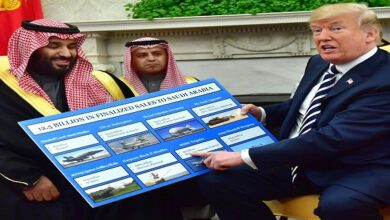