A group of Israeli settlers escorted by troops has razed agricultural property on and confiscated a large plot of private Palestinian land in the occupied West Bank.

Local Palestinian media reports said that several bulldozers belonging to the settlers, under the heavy protection of Israeli soldiers, entered the Khillat al-Nahla area south of Bethlehem City on Sunday.

The bulldozers leveled properties on more than 74 acres of land owned by the Palestinian farmer Mohammed Ayesh.

The raid was reportedly aimed at making way for a new outpost connecting the settlements of Tekou and Efrat.

In recent years, Israeli settlers have been frequently caught on camera vandalizing Palestinian farms in the occupied West Bank and stealing their olive harvests.

Palestinians say the thefts and vandalism occur mainly on Palestinian land near settlements that the Israelis can only reach by coordinating ahead of time with the Israeli military.

Furthermore, most of the attacks carried out by Israeli settlers against Palestinians and their property are met with impunity, with those guilty rarely facing any consequences.

In January, the United Nations Office for the Coordination of Humanitarian Affairs (OCHA) said Israel’s demolition and confiscation of Palestinian-owned structures in the West Bank had soared by 10 percent last year as the Tel Aviv regime continued with its land expropriation policies in the occupied territories in blatant defiance of international law.

More than half a million Israelis live in over 230 settlements built since the 1967 Israeli occupation of the West Bank and East Jerusalem al-Quds. Built on occupied land, the settlements are internationally condemned as illegal. 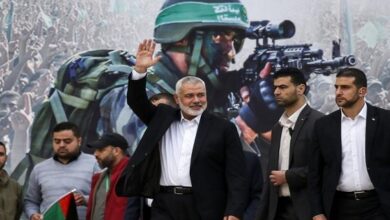 Haniyah: Hamas “Part of Axis of Resistance in Face of Israeli Enemy”