The Palestine Liberation Organization has said it holds Israel “fully responsible” for the death of an 18-month-old baby in an arson attack in the occupied West Bank and will lodge a complaint with the International Criminal Court (ICC).

The death of the baby boy on Friday morning was roundly condemned around the world.
Abbas said he had ordered his foreign minister to file a complaint at the International Criminal Court in The Hague.

“We want true justice, but I doubt that Israel will provide that,” he said of the attack in Duma, near the northern city of Nablus, Al Jazeera reported on Saturday.

Earlier, he had said that “when the Israeli government encourages settlements everywhere, they’re also encouraging these thugs to carry out these attacks. This is a war crime and a tragedy for all of us.”

The Hamas government in Gaza has also condemned the latest incident, and called for “a day of fury in response to the relentless Zionist assaults on Jerusalem and the murder of toddler Ali in Nablus.”

The US State Department condemned the “vicious terrorist attack” in “the strongest possible terms,” urging Israel to “apprehend the murderers” and calling on both sides to “avoid escalating tensions”.

Family members buried Ali Saad Dawabsheh on Friday afternoon, as his four-year-old brother and their parents, both in extremely critical condition for major burns, are being treated at hospital.
Hundreds of mourners attended the funeral.

In the clashes that followed the youngster’s death on Friday, Palestinians said 14-year-old Laith Khaldi was wounded by live fire north of Ramallah and died hours later in hospital.

The Israeli army said Khaldi was shot after throwing a Molotov cocktail at forces at a checkpoint.
Also on Friday, a Palestinian man was killed and another wounded by Israeli fire when they approached a security fence separating the Gaza Strip from Israel, medical officials said.

According to the UN, there had been at least 120 attacks by Israeli settlers since the beginning of 2015.

The Israel army issued a statement saying that they were trying to locate the suspects in Friday’s attack.

A recent report by Yesh Din, an Israeli human rights organization, showed that more than 92.6 percent of complaints Palestinians lodge with the Israeli police go without charges being filed. 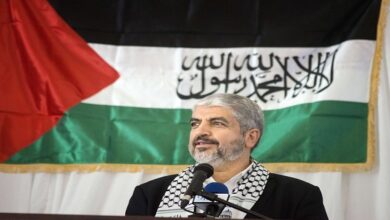 Hamas elects Khaled Mashal as head of its politburo abroad