At least 78 people were injured after Israeli forces attacked protest rallies against the regime’s settler-colonial activities in the northern part of the occupied West Bank on Friday.

The protests, which have become a weekly affair, erupted in and around the West Bank city of Nablus after Friday prayers, with Israeli regime forces using indiscriminate force to quell them.

The Palestine Red Crescent Society, a humanitarian organization working under the aegis of the International Red Cross, said at least 78 protesters were injured, including international solidarity activists.

Reports said protests took place in the villages of Beit Dajan, Qaryut, and Kafr Qaddum, and the neighboring governorate of Qalqilia.

According to the Palestinian Information Center, Palestinians marched through the villages in support of their cause of liberation from the Israeli occupation and aggression.

Elsewhere in the West Bank, Israeli settlers attacked Palestinian farmers, who were tilling their land.

A 64-year-old farmer was reportedly injured as a result of the settlers’ savagery east of the city of al-Khalil (Hebron) in the southern part of West Bank.

It came after three young men were killed by Israeli forces in an attack on the Jenin refugee camp in the northern part of the West Bank in the wee hours of Friday morning.

Palestinians marched through the refugee camp after the raid, carrying the bodies of the slain men and calling for undaunted resistance against the occupying regime.

The Palestinian resistance movement Hamas, reacting to the latest Israeli raid, warned that the Tel Aviv regime “will pay for its crimes” and that Jenin “will remain unbreakable.”

Later in the day, hundreds of Palestinians took part in funeral ceremonies of the three slain men.

The Israeli regime occupied the West Bank in 1967 in a Western-backed war. Ever since it has dotted the territory with hundreds of settlements that are deemed illegal by the international community.

An Israeli reconnaissance balloon fell over Beit Hanoun in the northern Gaza Strip on Friday afternoon, with reports claiming that the Israeli forces attacked the area shortly afterward.

The Palestinian resistance fighters seized the balloon, reports said, amid speculation that it could result in a significant information breach.

Some reports suggested that the balloon had been shot down by the resistance fighters Palestinians, forcing the Israeli military to fire warning shots.

Israeli forces then infiltrated Gaza’s border with the occupied territories to “restore” the balloon, but were forced to retreat after resistance fighters confronted them with live fire, Quds News Network said. 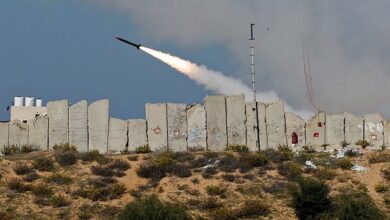