Israeli regime forces have killed two young Palestinian men and wounded another during a deadly raid on the Jenin refugee camp in the occupied West Bank early on Tuesday.

Palestinian sources said fierce clashes broke out between the Israeli regime forces and Palestinians after the former stormed the refugee camp at around 01:00 am local time (23:00 GMT) and opened fire at several resistance fighters and civilians there.

Medical sources claimed that Abdullah al-Husari, a former prisoner who was held in various Israeli jails, was killed and two others were injured in indiscriminate firing by the Israeli forces.

Al-Husari was a member of the Jenin Battalion of al-Quds Brigades, the military wing of the Islamic Jihad resistance movement.

The medical sources later said that one of the wounded had succumbed to his injuries. He was identified as Shadi Khaled Najm, a 19-year-old worker.

Israeli forces also raided the house of Jamal Abu al-Haija, a senior member of the Hamas resistance movement presently held in an Israeli jail, and arrested his son and former prisoner, Imad al-Din.

The Israeli military frequently carries out wide-ranging arrest campaigns across the occupied West Bank on the pretext of searching for “wanted” Palestinians.

Several thousand Palestinians are reportedly held in Israeli jails. Hundreds have been incarcerated under “administrative detention”, which allows holding Palestinian inmates in Israeli prisons without trial or charges.

Some Palestinian prisoners have been held in administrative detention for up to eleven years.

The Palestinian resistance movement Hamas decried the Israeli attack on Palestinians who gathered at Bab al-Amoud (aka Damascus Gate), one of the main gates of the Old City of al-Quds, to celebrate the Muslim holiday of Isra and Mi’raj earlier in the day.

Mohammed Hamada, a spokesman for Hamas in al-Quds, described the attack on Palestinians at Bab al-Amoud as “a brutal crime” and a “dangerous” escalation, holding the Israeli leaders responsible for its repercussions.

“Our people will not stand idly by and will vigorously continue their intifada (uprising) against these brutal crimes, to protect al-Quds and al-Aqsa [Mosque],” he added.

The tensions that erupted in al-Quds last year sparked a May 2021 war between the Israeli regime and resistance groups in the Gaza Strip.

Israel occupied the West Bank and the Gaza Strip — territories the Palestinians want for a future state — during the Six-Day Arab-Israeli War in 1967. It later had to withdraw from Gaza.

More than 600,000 Israelis live in over 230 settlements built since the 1967 occupation of the Palestinian territories of the West Bank.

All the settlements are illegal under international law. The UN Security Council has condemned the illegal settlement activities in a series of resolutions. 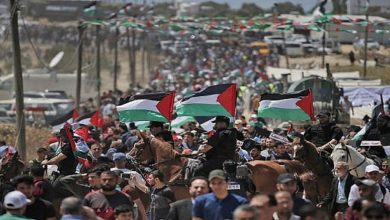