An Israeli court has sentenced the head of the northern branch of the Palestinian Islamic Movement, Sheikh Raed Salah, to 28 months in prison on trumped-up charges of “fomenting incitement against Israelis and advocating violence.”

On Monday, the Haifa magistrate’s court passed the verdict against the 61-year-old cleric.

Israeli judge Shlomo Banjo said in his verdict statement that Salah is “dangerous.”

“In light of Sheikh Raed Salah’s previous violations and his clear ideological motives, his activities have worsened with time,” Banjo said, adding, “Today, as in the past, he uses troubling speech to incite terrorism.”

Sheikh Salah, in return, dismissed the charges, and said following his sentencing that all the proceedings in the case were “far from the truth.”

His defense team announced in a statement that “since 2017, restrictions have been imposed on the Sheikh by preventing him from communicating with the public and the media because the occupation is fully aware that every word that comes out of it has significant implications and impact.”

Sheikh Salah was arrested and charged two years ago for praising three Palestinians who shot dead two Israeli police officers in a gun battle at the entrance to al-Aqsa Mosque on July 14, 2017.

He had been released from prison in 2017 after serving a nine-month sentence for “inciting violence.”

The prominent Palestinian cleric has repeatedly expressed support for “resistance” and warned his followers that the Israel regime is seeking to destroy al-Aqsa Mosque.

Meanwhile, the Palestinian Islamic resistance movement, Hamas, has strongly condemned the Israeli court ruling against the head of the northern branch of the Islamic Movement, emphasizing that the verdict is meant to silence all free voices defending the Palestinian nation, Jerusalem al-Quds and al-Aqsa Mosque in the face of the Tel Aviv regime’s schemes.

Hamas said in a statement on Monday that the ruling “reflects the extremist and racist mentality that governs Israeli institutions, particularly Israeli courts and its judiciary.”

“Such unjust rulings against the Sheikh of al-Aqsa and many of our people in al-Quds, the West Bank and the occupied territories will not stop our people as well as national leaders and scholars from carrying on their struggle, and performing their duties as regards Palestine, its people and its sanctities,” the statement read.

Separately, dozens of Israeli settlers have stormed the al-Aqsa Mosque compound in the occupied Old City of East Jerusalem al-Quds amid frequent acts of violence committed by Israeli forces and settlers against the Palestinian people.

The Department of Islamic Endowments in Jerusalem al-Quds said in a statement that 79 settlers, including 30 Jewish seminary students, broke into the compound on Monday morning, and toured the sacred site “provocatively.”

A large number of Israeli forces had been deployed across the compound for their protection.

The al-Aqsa Mosque compound is a flashpoint, highly respected by Muslims, Jews, and Christians alike. The mosque is Islam’s third holiest site.

Palestinians have long been wary of Israeli attempts to change the status quo of al-Aqsa Mosque, where only Muslim prayers are allowed under the status quo reaffirmed in 1967.

The holy compound is administered by the Islamic Waqf endowment on behalf of Jordan and Palestine. Non-Muslims can visit the site, but cannot pray there.

This coincided with the chief rabbinate of Israel’s declaration in 1967 that Jews were not allowed to the compound as it would desecrate the site’s holiness.

However, Israeli settlers, escorted by the regime’s military, frequently desecrate the site by forcefully entering the compound. 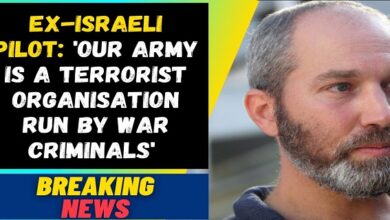 Ex-Israeli pilot: ‘Our army is a terrorist organisation run by war criminals’