Chief of Tehreek-e-Nifaz-e-Fiqah Jaffaria (TNFJ) Agha Syed Hamid Ali Shah Moosavi while strongly condemning the blasts at Imambargah Karbala Gamay Shah and Bhati Chowk in Lahore said that terrorism and blasts could not divert us from following Ali (A.S.) and Hussain (A.S.). In a statement issued from the headquarters of the Maktab-e-Tashayyo he said that we can sacrifice our life but could not a llow death of Azadari, terrorism could not stop us following the path of Hussainiyat as we have been brought up under the shadow of swords and would reply oppression with Mazloomiyyat.

Agha Moosavi demanded from the government to take practical steps to provide protection to the people instead of giving mere lip-service because the rulers who could not provide peace and protection to the people have no right to rule. He said it is the need of the hour for all patriotic people to remain peaceful and keep in mind and also declared upon the enemy that even we are cut into pieces but we would not allow anyone to cut Pakistan into pieces and no power on earth could create differences amongst the recognized schools of thought.

Agha Syed Hamid Ali Shah Moosavi has said that we are following the point of view from the beginning that a terrorist keeps no Maslak, Maktab or country, he is only a terrorist and is the enemy of Islam and Pakistan. He said those who are engaged in jala-gherao in the garb of blasts have no connection with Azadars. He appealed the people not to get enraged rather keep a strict eye on miscreants. He demanded immediate arrest and strict punishment for all those involved in the blasts and firing incident in Karachi and Lahore in the mourning processions on the occasion of Shahadat of Hazrat Ali (A.S.). He expressed heartfelt sympathies with the bereaved families of those who have lost their life in the incident and prayed for the early recovery on the injured. 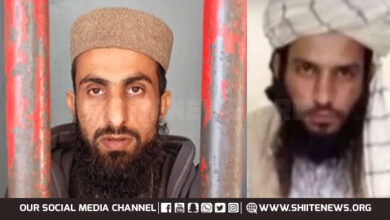 Pakistan ready to respond to any ‘short’ or ‘long’ war: Khawaja Asif

Sympathetic of banned organizations, Rana Sanaullah should be expelled from the Cabinet: Sahibzada Hamid Raza