The Jafaria Alliance Pakistan has condemned the gun and bomb attacks on the Yaum-iAli (AS) processions in Lahore and Karachi and announced a three-day mourning over the tragedies.

Holding the banned militant groups responsible for these terrorism incidents, JAP chief Allama Abbas Kumaili said that the acts of terrorism Â were similar to the incidents of Ashura procession, Chehlum procession and Nishtar Park congregation. He demanded of the government to bear down on the offices and centres of Lashker-iJhangvi, Punjabi Taliban and other banned militant outfits.

“The government should strictly deal with the seminaries involved in terrorism in order to save the countryâ€™s economy and social orders” Â he demanded.

He pointed out that the Punjab government was defending and supporting the Punjabi Taliban with different names including the Sipah-e-Sahaba and Lashkar-e-Jhangvi, who continue with their activities throughout the country. Kumaili said all terrorist acts in Lahore and Karachi from Ashura to Data Darbar and Youm-e-Ali had materialised through the seminaries.

Majlis Wehdat-e-Muslimeen (MWM) Central Spokesman Maulana Hassan Zafar in a hurriedly called press conference here at Lahore, condemned the triple bombing incidents on mourning procession of Youm-e-Ali (AS) and demanded of the government to immediately sack the Provincial Minister Rana Sanaullah over his allegedly links with terrorists outfit Sipah-e-Sahaba and Taliban terrorists. 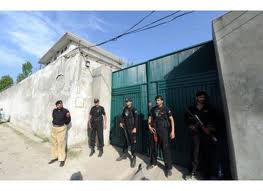